John A. said:
@cmcdonald Just wanted to share this with you.

While both of them are turds to the highest degree, it's pretty bad when micheal moore takes the mic away from you.

just FWIW, what david hogg is telling people to do is highly unlawful.

start about 1:10 to skip the touchy feely huggy crap.

I hate that kid btw. Wasn't even at the school when the shooting started (admitted on camera), took his bike over to film the aftermath... claims victim status and is launched into fan fare due to connections of his retired FBI father.

Staff member
Administrator
Global Moderator
And his mother being big on CNN. Planned Parenthood. Other decidedly leftist organizations. Oh, and that emma gonz. is his cousin. His mother and her mother are sisters far as I can tell. Several Soros funded organizations had already applied for permissions to operate in florida in advance of the shooting specifically listing MFOL. How else do you think it was organized and approved so quickly following the shooting. They were already approved.

They (mfol) are affiliated with moms demand action and even blm. That's why they drop names and push for "racial justice" so frequently.

Hogg had even participated with "CNN summer camp" prior to the shooting. There are (or at least were) photos of it on his Mothers facebook in the days following the heinous shooting. 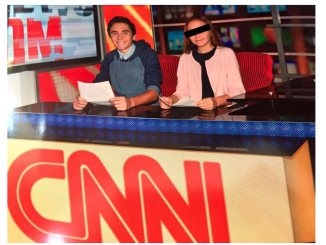 John A. said:
@cmcdonald Just wanted to share this with you.

While both of them are turds to the highest degree, it's pretty bad when micheal moore takes the mic away from you.

just FWIW, what david hogg is telling people to do is highly unlawful.

start about 1:10 to skip the touchy feely huggy crap.

First off, I’m with you...I can’t stand either one of them. I refuse to watch Moore’s crap. The kid is even more infuriating for his outright arrogant and smug demeanour, junior man needs to learn some respect and manners.

All I can say is beware of ANYONE who says they have all the answers and/or preach it like they do. I don’t care what the color of their skin is...whether white, black or orange. I don’t care what political or religious stripe either, doesn’t matter. Fact of the matter is, until we can agree to disagree on some matters and find common ground on others and be willing to hear each other out, division will be the result.

Western society and traditional western values are under a concerted attack and we are all in different battles but are all indeed in the middle of the same war. We have those trying to influence and infiltrate from the outside and those who have already been converted and are attempting to sabotage from within.

IMHO, one of the big problems we’re facing is one of relative morality. Each doing what is right is his/her own eyes. I believe this is a catalyst for discord and catastrophe. It would be ok IF each of us could actually accept everyone else’s morality and choices. But the fact is most of us can’t. (Myself included)

Some people’s morality and choices violate other people’s right to live in peace and security. It is my opinion that in general, people cannot be trusted to do no harm. One only has to look at what is happening on our own doorsteps...let alone look what is happening all around the world in many, many non-western nations...unspeakable immorality and brutality. It doesn’t matter what inspires it or what you call it, be it criminal, religious, political or racial. It’s all evil when people are marginalized, persecuted, tortured and murdered.

Staff member
Moderator
Supporter
"Philanthropist"
Back to Mike’s op...this whole handgun ban thing is getting quite a bit of push back. I’m liking what I’m hearing even coming out of a couple media outlets which tend to be left leaning (which mainstream news org isn’t?). Albeit, they are mainly opinion pieces rather than news. They are however staff written and not from the public.

There are also numerous opinion pieces from the pro-gun side which are obviously supportive of firearms owners and against further prohibitions or restrictions on top of already restrictive laws.

The last article here is a well written and substantiated (as usual) rebuttal by way of research by Dr. Gary Mauser.

I have never seen anyone shred his articles with anything but opinion. He does his homework very well and presents the stats as is.
Last edited: Sep 11, 2018

When firearm licensing was introduced in 2001, between one-third and one-half of then-law-abiding Canadian gun owners declined to apply for a licence. Though civilian gun owners ranged from 3.3 million to 4.5 million in 2001, fewer than 2 million licences were issued. Many gun owners remain outside the system.
Click to expand...