Today I went to the rifle club in Aubury CA, and shot my .45 and .308 handloads thru the new RCBS chronograph I got for Christmas. Weather was mostly sunny and in the 50s with occasional light Breeze.

I put all the .45 chrono loads into a 10 yard target (which developed much daylight after 40 rounds) & I ONLY managed to shoot the chrono twice with the 1911.

They were just flesh wounds, and except for eating batteries at a high rate, it was ok all day. I managed to chrono 80 rounds total & by the end I was on my 3rd battery. ​
The .45s were all the same: Xtreeme copper plated lead 200g roundnose on 4.5 grns of Red Dot.
Average velocity of 20 rounds was 785fps. I wasn't shooting for accuracy, but just to chrono them.

I had taken my scope off yesterday, lapped the rings and re-mounted it, so you'd suspect the POI would be all wonky but it was not so. I shot this at 50 yds thru the chrono with the weakest loads: 180 grn TSX /44.5 grns varget. I was trying to miss the chrono more than hit the target here. my pattern is over 3 MOA actually, but it was OK because I was on the paper! 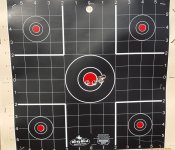 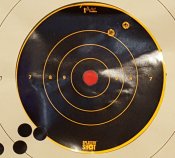 Then I shot 3 with about the same results. The scope was clearly still very close to the old POA, as I would normally be 4.5" high at 100. 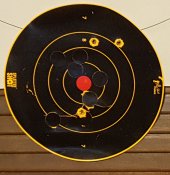 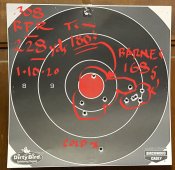 Then I was out of 168 and swiched to 180 grn TSX over 45.5 grns Varget. (Those were over 100fps slower.) I put one nearly in my previous pattern with a light up-flinch. Then I adjusted POA 2 MOA left and shot the 4" pattern. I hit the bullseye with my last shot of the day. I took that as a good omen and went home.

It looked far bigger than that to me on the splatter Target but when I measured it the truth is revealed.