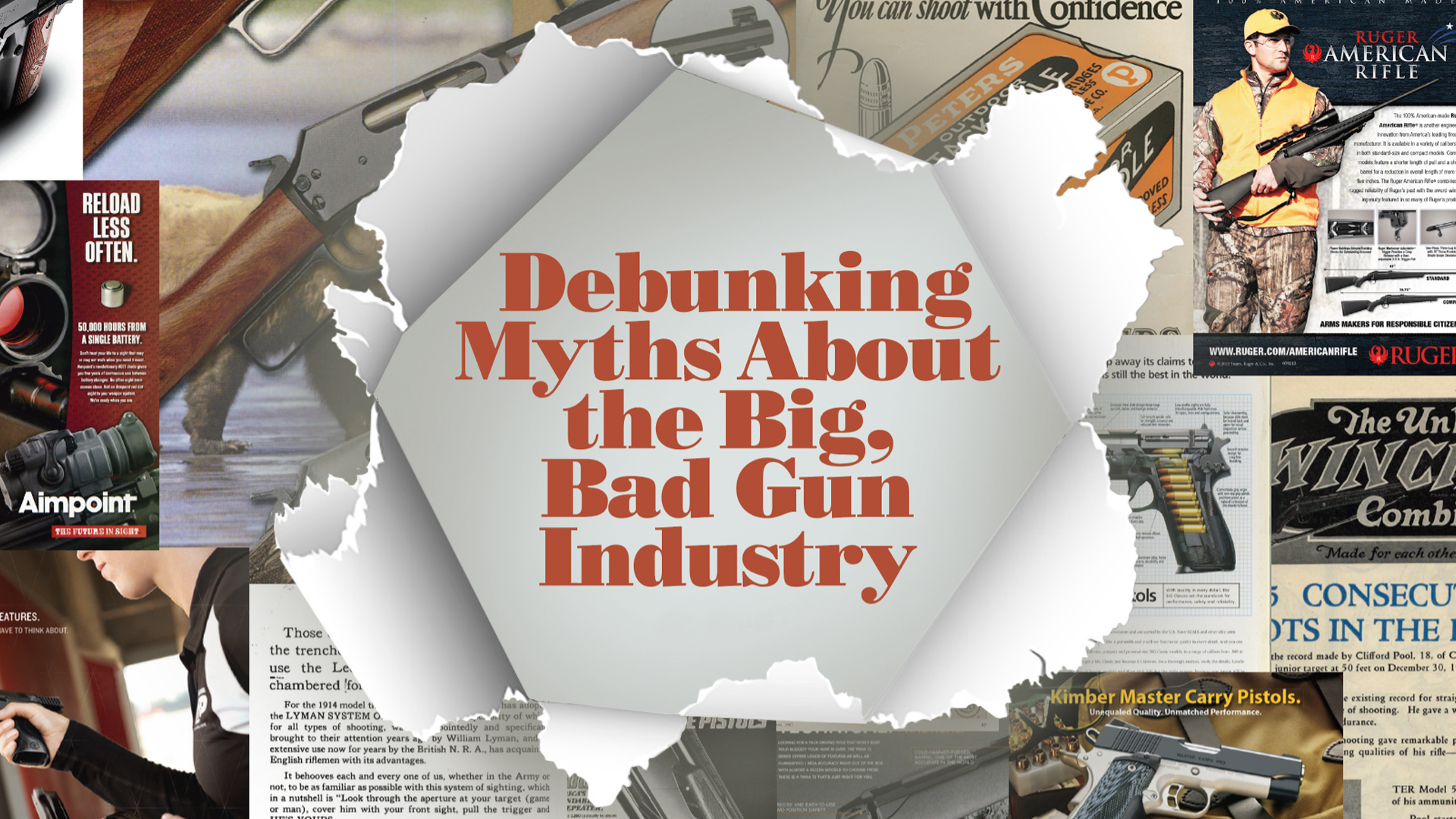 An Official Journal Of The NRA | Debunking Myths About the Big, Bad Gun Industry

The best hope for American freedom is to fight falsehoods about gun ownership, crime and more with the truth. 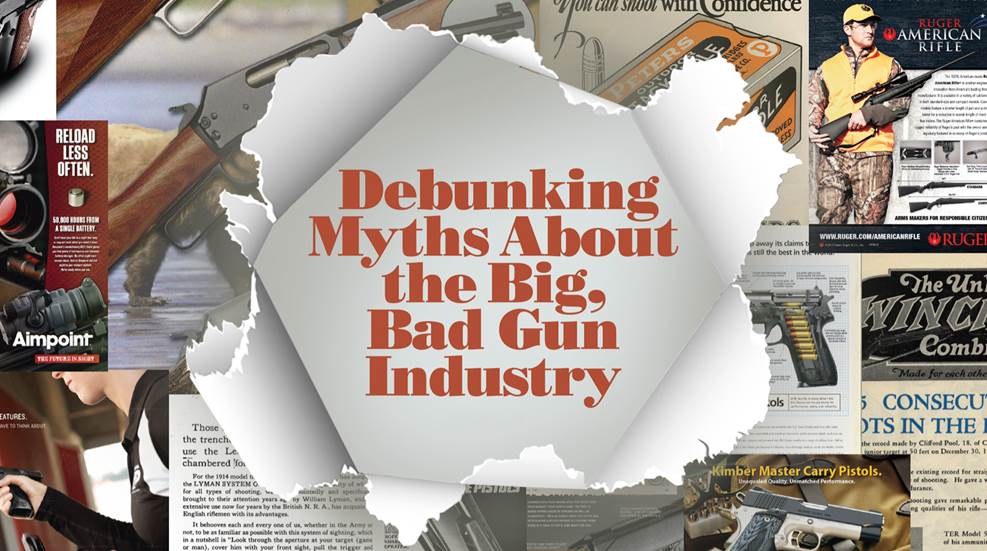 Just like any other industry, gun companies have always advertised the innovations of their products. Now, gun-control advocates accuse gun manufacturers of purposely producing ads that cater to criminals.

A decades-old gun-control narrative has been resurging in recent months, sweeping across the national scene in everything from celebrity Twitter accounts to The Atlantic magazine articles to congressional hearings.

The story’s plotline goes something like this: The gun industry is a nefarious actor that profits off of the “gun violence” it facilitates by marketing its lethal products to other bad actors. This industry is this generation’s “Big Tobacco,” waging a deadly disinformation campaign on the American public, but Congress gave it special protections from civil liability so it can’t be held accountable for any wrongdoing. We need to repeal these protections, sue the gun manufacturers and sellers into oblivion (or at least into compliance with our preferred gun-control policies) and force them to “foot the bill” for “gun violence,” just like we made tobacco companies compensate states for smoking-related medical costs.

This narrative makes for a great bedtime story in gun-control circles; it comes complete with a villainous troll blocking the bridge to “common-sense gun safety,” which must be slain for the good of the nation.

Except, like most bedtime stories, this narrative is full of mythical elements. And it’s far past time for the adults in the room to discern fact from gun-control fiction.

Myth #1: Congress gave the gun industry special protections that make it completely immune from all liability.

It is true that in 2005, Congress passed the Protection of Lawful Commerce in Arms Act (PLCAA) to prevent some types of lawsuits from being brought against gun manufacturers and sellers. But it is not at all true that this law, passed with overwhelming bipartisan support, completely immunizes the gun industry from all civil liability. All the PLCAA does is prevent lawsuits against gun manufacturers and sellers seeking to hold them liable for harm caused by third parties who used the guns in an unlawful manner. Members of the gun industry can still be held liable for a whole host of widely recognized tort claims, such as selling defective products, making false advertisements and failing to abide by the numerous state and federal laws regarding product safety, sales and record-keeping.


The explicit protection against liability for third-party actions is uncommon, but not unique or necessarily broad compared to protections received by other industries; for example, Section 230 generally gives internet service providers immunity from defamation and copyright infringement claims over content (such as comments, articles or videos) created and posted by third-party users. After 9/11, Congress passed several laws protecting the airline industry and its employees from civil liability for reporting suspicious behavior to law-enforcement officials and protecting passengers and crew members from lawsuits over actions taken during in-flight emergencies. And the National Childhood Vaccine Injury Act of 1986 and the Public Readiness and Emergency Preparedness Act of 2005 provide vaccine manufacturers and distributors with incredibly broad immunity from liability for any and all harms caused by their products.

Finally, to whatever extent the PLCAA does offer the gun industry some unique set of protections, it is because the industry was faced with a unique set of threats. The PLCAA was a direct response to a concerted effort by gun-control advocates to keep firearm manufacturers and sellers perpetually bogged down in frivolous-but-expensive lawsuits, with the hopes that they would eventually just agree to cave to the advocates’ policy demands. In this way, activists could strong-arm the industry into “voluntarily” adopting measures that the gun-control groups couldn’t get passed into law, either because of a lack of popular support or because they would be just flat-out unconstitutional. Congress stepped in to block this abusive litigation from occurring, but did not block any other type of standard consumer protection or common-law tort action.

Myth #2: The gun industry makes enormous profits off of criminal violence and should therefore be forced to “foot the bill” for its costs.

Gun manufacturers and sellers make money because they sell products that millions of ordinary, law-abiding Americans want to buy. In this case, the firearms and ammunition they sell also enable these Americans to exercise their fundamental constitutional right to keep and bear arms, which, in turn, allows them to more-effectively defend themselves and others from criminals who would harm them.

Many politicians and gun-control advocates decry the fact that the gun industry, like every industry, aims to be profitable, even though their products (like virtually all products) can be misused. But at the end of the day, gun manufacturers and sellers who comply with federal law are not the ones inflicting harm on innocent people. They should not be scapegoated for the actions of criminals, many of whom broke the law to illegally obtain their firearms from illegitimate channels.
1

Gun-control advocates have increasingly asserted, both as part of a public-disinformation campaign and in legal actions designed to circumvent the PLCAA, that gun companies facilitate violence by advertising their products in ways that entice would-be criminals to purchase them; for example, a recent lawsuit against Glock claims that the company should be liable for a mass shooting on a New York City subway train because its advertisements emphasize the easy concealability and magazine capacity of its handguns—traits which are allegedly “appealing to prospective buyers with criminal intent.”

Meanwhile, attorneys suing Remington on behalf of the victims of the 2013 mass shooting at Sandy Hook Elementary School have repeatedly claimed that companies “target younger, at-risk males in advertising and product placement in violent video games,” insinuating that this plays a role in mass shootings. And consider also comments by Brady Campaign President Kris Brown, who decried Smith & Wesson for “marketing assault rifles” and “military and police weapons” to civilians, claiming this has “contributed to numerous mass shootings.”

These arguments are illogical on their face. Take, for instance, the argument that marketing a gun’s concealability and magazine capacity is inherently marketing to criminals. While these features could, in theory, be used for criminal purposes, they are also incredibly desirable for law-abiding citizens using firearms for lawful purposes. Assuming that the magazine capacity is consistent with applicable state laws, there is nothing inherently criminal about desiring a firearm capable of holding more rounds. Law-abiding citizens can reasonably believe that they benefit from a higher magazine capacity in lawful contexts, like being better protected against criminal threats (especially those involving multiple assailants) without having to reload. And, in the case of states that prohibit the open carry of firearms, concealability may be more than just desirable—it is a legal necessity for individuals who lawfully carry in public.

The argument that marketing “military and police” guns to civilians logically leads to those guns being used for mass slaughter is equally absurd.


Semi-automatic firearms—much like radios, Dodge Chargers, body cameras and a whole host of other products—are lawful for civilians to possess and are often desirable in a variety of civilian contexts for the same reasons they’re desired by the police. Companies market the military and police use of certain features or products because if the government chooses to use them, it presumably indicates their quality and effectiveness in a lawful context. To insist that the marketing of “police and military” features of firearms necessarily markets them to criminals for illegitimate uses is to insist that the military and police use them for primarily illegitimate and criminal purposes, and that this is in fact the primary reason any civilian would also find these features desirable. This is a perverse and outrageous assault on the integrity of United States law enforcement and the military. It is particularly asinine with respect to law-enforcement-based marketing tactics, as peace officers in this nation don’t wage offensive warfare but respond defensively to the exact same threats first faced by the civilians who called for their assistance.

Finally, to the extent that certain firearms appear in violent video games, gun companies rarely have any control over whether their guns are featured or to what extent. This has been particularly true since 2013, when major video game developer Electronic Arts publicly declared it would no longer enter into licensing agreements with gun companies before using their firearms in its games, because their right to accurately portray firearms was protected by the First Amendment. Most video game developers quickly followed suit, and it does not appear that any gun company has successfully challenged the unlicensed use of their products in these video games. Moreover, instead of encouraging acts of criminal gun violence, these video games often portray the honorable and justified use of firearms against the very types of bad actors who perpetrate illegitimate violence.

Myth #4: The gun industry is just like “Big Tobacco” and should be sued accordingly.

For decades, the arguments against tobacco companies were that they intentionally misled consumers about the harmful health effects of smoking and that tobacco smokers did not know cigarettes could kill them in the long run or that tobacco products were incredibly addictive. But there are no similar “hidden harmful risks” for firearm ownership. People lawfully buy guns precisely because they have the potential to be used in a lethal fashion, and because sometimes lethal force is necessary for safeguarding life, liberty and property. Unlike tobacco, firearms have a significant positive impact on society when employed for lawful, ordinary purposes, and are used to protect innocent life far more often than they are misused to threaten it.

Modern firearms rarely cause unintentional or unforeseen deaths absent some sort of criminal, reckless or negligent action on the part of the person using the firearm. And, in the rare instances where a design or manufacturing flaw is in some way to blame for a death or injury, gun manufacturers and sellers can already be held liable for damages under normal tort law. Moreover, the mere presence of guns does not induce suicidal or homicidal feelings in people who did not otherwise already have those feelings.

Far from perpetrating deceptive practices, the gun industry is arguably the victim of a decades-long misinformation campaign waged against them by gun-control advocates; for example, gun-control groups routinely prey on many Americans’ lack of basic firearm knowledge to convince them that certain “scary-looking” semi-automatic firearms are “assault weapons” whose only purpose is to “hunt humans,” even though these guns are functionally indistinguishable from other semi-automatic firearms. The term “assault weapon” is, itself, a method of disinformation, a term coined by gun-control advocates who hoped that Americans would confuse these guns with “assault rifles,” which can fire in fully automatic or “burst mode” and are already heavily regulated under federal law.

The best hope for America is for the adults in the room to stop believing the mythical fairy tales about the Big Bad Gun-Industry Troll, and start focusing on holding accountable those who actually commit violent crimes with firearms.