"Philanthropist"
I saw this forend on a Mossberg 590 and was wondering if anyone has actually shot one and could comment on its actual utility? Did the three rails impacted your ability to grip or operate the forend especially without gloves? Or if rails under recoil cut into your hand? Appears to have some sharp corners. 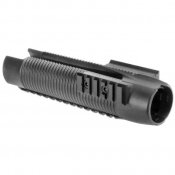 That's to many sharp corners to gouge out hunks of skin on my hands for me.

Moderator
"Philanthropist"
Looks sharp, in an injurious kind of way.

And just how much crap does one hang on a long gun anyway?

Staff member
Administrator
Global Moderator
"Philanthropist"
I have not tried that one but have used other railed forends. I hate them all, they all seem to impede or inflict pain in some shooting positions.

If you want to mount a light or cam a barrel clamp mounted outside of where it can contact your hand works better.

I believe this was designed more for specific use with a grip, something like a Magpul AFG would fit nicely. Put covers on the unused space and call it a day. The two smaller rails on the side are great for a light, but are also removable. But I do agree, shooting without anything on the rails would turn into a long day.

Foreend straight from the kitchen...

But I have one of the older Ergo brand tri-rail aluminum handguards on my oldest 500. Using simple ladder rail covers worked well, but after I put some of the magpul XRT covers on the side and a magpul afg grip on the bottom, dang if it ain't just about perfect.

It's hard to see the angled grip in this picture, but I'm not sure if I have another picture of the gun or not. I will mention that unless you plan on mounting lights and lasers and grips, there's not really much of a reason to swap the one that's on it. 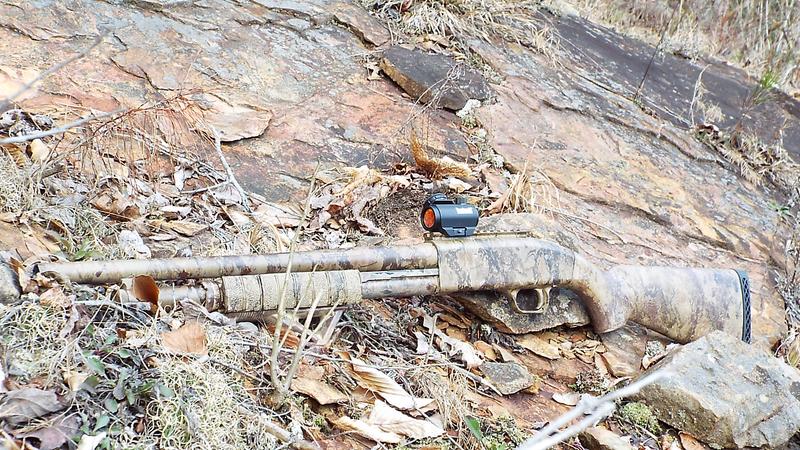 The regular magpul handguard gives the ability to mount other stuff using their mlok rails and accessories if you were inclined. It's a lot cheaper than my old ergo and I do like the built in hand stops. I've been carrying this one a lot. I admit that I did use a soldering iron and about 30 minutes of my time to stiple the surface where my fingers would go. Not that it would be necessary, but that's my field gun and having some extra grip never hurt. It's not like it ever rains or snows or gets muddy or icy outside LOL 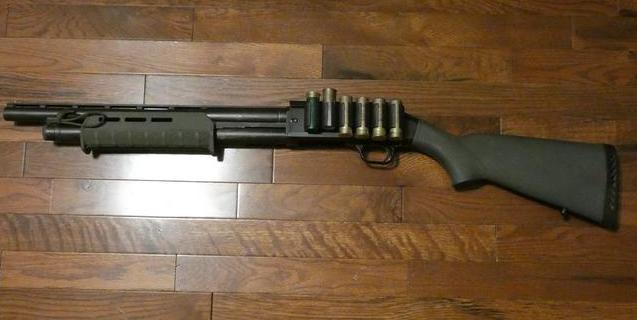 You can see the stipling better in this picture. 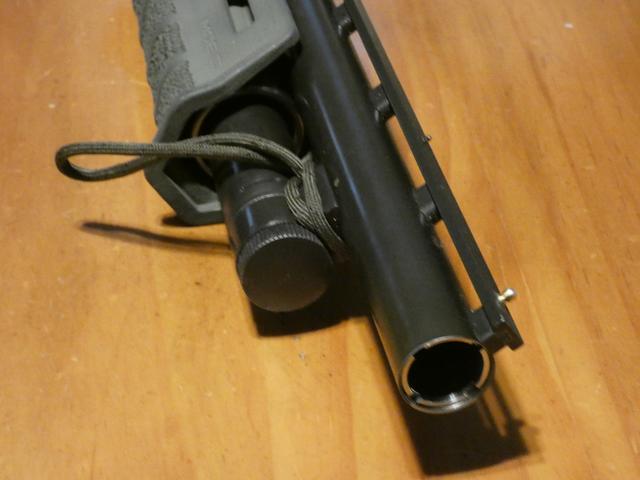 "Philanthropist"
Where I saw this was on a new Mossberg 590 offering under Clint Smith's Thunder Ranch partnership with Mossberg, Here's a picture of the gun from the Mossberg site.

I have not touched one but had some of the same concerns expressed above regarding the suitability of the forend. Apparently it's made by a company called Aim Sports and can be purchased separately. I'm not sure why you would ever need three rails on a shotgun forend and IMO the GG&G mount is the best flashlight mount and doesn't clutter the foreend.

But to each their own!

Premier Member
Ernst, I had one of these tri rails on my 590A1. It was not great. You had to watch your hands when shooting heavy recoil loads. I removed it and sold it. Replaced it with a hogue and couldn’t be happier.

Ernst said:
I saw this forend on a Mossberg 590 and was wondering if anyone has actually shot one and could comment on its actual utility? Did the three rails impacted your ability to grip or operate the forend especially without gloves? Or if rails under recoil cut into your hand? Appears to have some sharp corners.

Ernst said:
I saw this forend on a Mossberg 590 and was wondering if anyone has actually shot one and could comment on its actual utility? Did the three rails impacted your ability to grip or operate the forend especially without gloves? Or if rails under recoil cut into your hand? Appears to have some sharp corners.

I actually have one currently on my 590.

I've had it for about 11 years on it and I have never had any issues with it "grating" my hands. Lol. But I do have rubber picatinny rail covers on it to get a better grip with some ergo stops on it.
It just looked wicked and I like it so it's all that matters.