I've always just lead the target and not heard of the "Cover it and Pull away", and I know the habbit of stopping after pulling the trigger!

I think I have always done it... Not good for misses.

The dog pointed and "whoa"ed... and flushed birds out of heavy cover!

I got out of the way and Allison pulled the trigger and brought down a couple birds! The one flew and landed, Ivy found it and flushed it again. Again Ally fired and seemingly missed. But she must have winged it slightly. When Ivy found it the third time, it didnt even move and Ivy picked it up and brought it to us.

This point was early, before we went out into the field, just warming Ivy up. 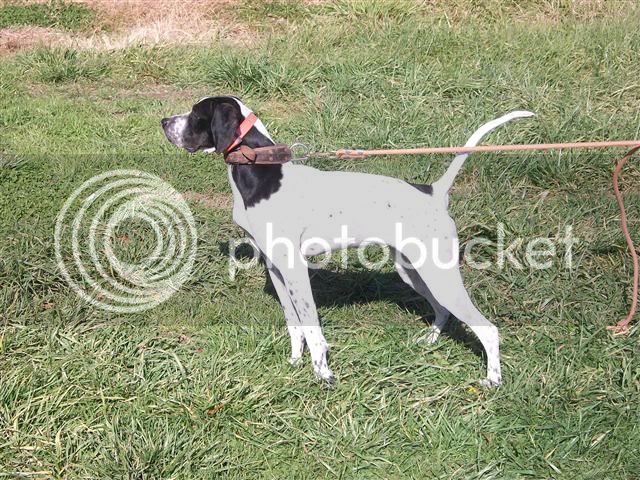 Though Ally shot em, I wanted a pic with my dog and what she found for us! The birds are in the black mesh bag I'm holdin across her side. 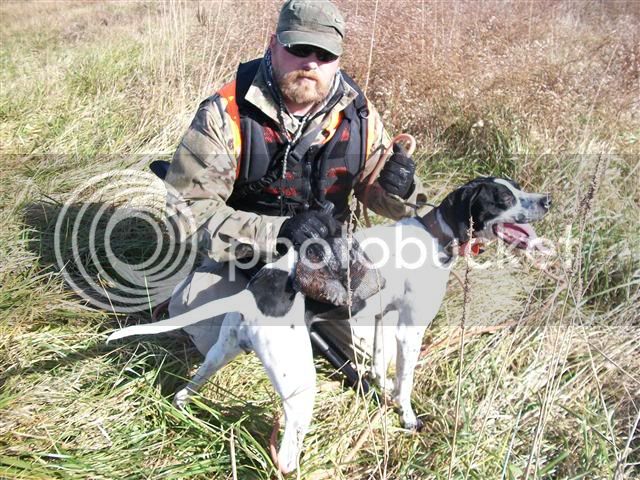 And finally for now, while I'm putting the video together, Ally posin with her birds and her Mossberg! She got these with her .410 and Federal 2 1/2" HiPower #6. The Federal is a high brass full power load. 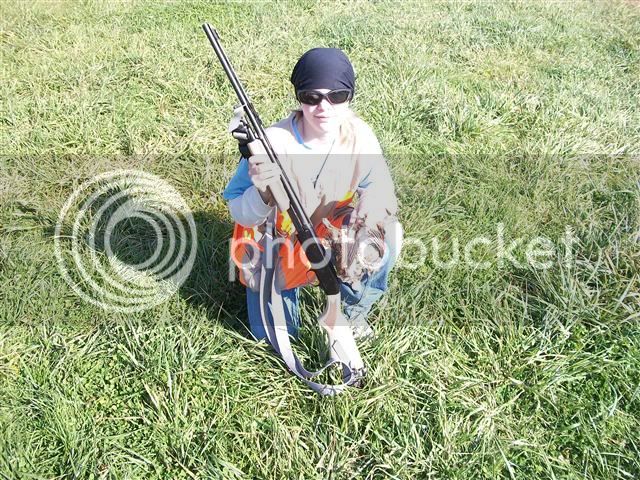 Video will be up this evening!

Blue! We practiced with tennis balls first this morning! When she was comfortable, she started shooting them, and after a couple hits was confident and ready for the birds! Thanks again for the advice! I needed the practice too! Its been years...

+1 rep for you for giving Ally the time of her life!!

We had a great time, Allison was so excited and later said she was shaking afterwards, after that first one she dropped!

I'm uploading video now, but my computer is being sooooo slow...

I've been having Ivy flush the birds... The brush is so heavy and thick, I cant get in there to stomp and kick around to flush them out. Ivy has no problem burrowing through the dense grasses.

She is also absolutely fine with the gunfire, in this video, Allison fired almost directly over top of both Ivy and me. Ivy instantly takes off the direction the bird was traveling without being able to see where it went, and you'll see in the video, she finds it and points it again after it drops then retrieves it also!

No more talking, heres the video!

That was AWESOME!!! I was laughing, especially when Ally says "ewe! Ewe! He's alive still! Gross!" LOL!! That was my exact words when I got my first one.

Great pics and video of a successful hunt with your daughter Bro !!

Sounds like a good time was had by all...even Ivy !!

Ally said to tell your boy thanks! Ally is pretty much over the gross... I dont think any likes wringing a birds neck.

We got a couple more today, though one was too close and I shredded it with 7 1/2 shot. Oops.

Ivy is doin great! I put a small cowbell on her so we let her off the check cord altogether today. The combination of the electric collar and bell works good for us! She had 9 or 10 solid points today, even pointed another right after we got one. I wanted to recover the downed bird first, but we flushed the point and went back to the other. She points em for us even after theyre down, which is great cuz theres no way we can see them in the grass, and shes even gone into the woods to retrieve them too.

Speaking of woods... A couple flushed into the woods that we didnt hit. Ivy went in there and found em again. She pointed the couple that flushed in there, and pointed a couple more we didnt know about! We would flush one and shoot, and she would be pointing another one!

She isnt phased at all by gunfire and runs in the direction we're shooting to either recover the birds, or find them again.

I came home and told Jenny Ivy is way better than Ally and I. She said thats great! Now we need to go hunting with people who can shoot better!

Supporter
"Philanthropist"
That was awesome !

Global Moderator
Sponsor
Moderator
UGH!!!!! I just kinda wanna shout for a while... I wont just at the moment though.

We (myself, Ally, and Ivy) were out this mornin at a state game preserve. Ok, I get its Thanksgiving day, but there were like a hundred people hunting this 1800 acres!

We hiked well over a mile and a half and found a nice piece of ground with tall heavy grasses. We saw another group not far behind us. So we walk in and I set Ivy in a direction and told her to go get em for me!

After just a few minutes, I couldnt hear Ivy's bell, I figured she went too far so I started callin her back with the whistle. We didnt hear anything! We started back towards where we last saw her go. Well, my bad, apparantly she had been pointing a bird and we took to long getting to her. The most beautiful ringneck pheasant flushed in front us! Dang! When she points, she gives us plenty of time to get ready, I havent been able to make her break a point recently. But like I said, we took too long...

I wasnt ready, so I brought my gun up and flipped off the safety. Ally wasnt in position to back me up and her muzzle would have been only a foot from my head. I drew a hasty bead on the bird and pulled the trigger... and missed. Chambered another shell and followed the bird BUT! I could see the blaze orange of the other group coming into my firing line! I put my gun down and pulled the safety back. I let it go.

The other group however saw it coming and had time to get a good shot on it as it passed them. They brought it down and collected the bird.

Man! That was my bird that my dog found! They had their own dog and their dog didnt find it! If they let it come down on its own, Ivy would have found it again!!!

I'm wearing my angry face right now. I like coming back home with stories of how Ally and Ivy are doin, and this one didnt go our way. I'm lookin for a trophy to mount, a memory and tribute to my hunters here at home...

Global Moderator
Sponsor
Moderator
I'm takin my youngest with us tomorrow mornin! I got her an orange vest tonight, her first and very own!!! I also warned her we're gettin up at 5 in the am!

Lauren is 5 years old, shes my baby! Allison isnt real happy about it, but I told her we'll go back to the game preserve on sunday.