Moderator
"Philanthropist"
John, I was certain that you were younger than me. I think I'm the "old guy" here!

I'll get some close-ups of the mags but it is nightfall right now so it'll wait for another day. Here's a glimpse of one of the D&H-20s in one of my ARs. What is different about them is they are curved 20s. I like 'em a lot! You can see the stampings on the side in this photo.

NiteSite, I too have D&H magazines! I've been happy with them thus far, and while they dont load seemingly as simple as the Pmags, they have loaded and fired with no snags and they have the Magpul anti-tilt followers! They are aluminum with the teflon coating, but I dont know about a CaGE number...

I know my experience is nil compared to others, but I've been very happy with the magazines I've purchased and will add my own pics soon!

LES, what do you think about moving your Pmag review here? Your call man!

Rossignol said:
I dont know about a CaGE number...
Click to expand...

One of the photo's above showed a CAGE number.

Global Moderator
Sponsor
Moderator
LES! Excellent!!! Thank you, good info and good lookin out on runnin the magazines through the FN SCAR!

John, Gotcha! Thanks, now I know what to look for!

Rossignol said:
John, Gotcha! Thanks, now I know what to look for!
Click to expand...

They can also be found on the floorplate.

Global Moderator
Sponsor
Moderator
I've seen a bit here and there about 10 and 5 round magazines.

What do yall use, 10 round with a limiter or reducer to get to 5?

Staff member
Administrator
Global Moderator
For hunting mags, I usually use a regular (20 or 30) round magazine and limit it to 10 rounds.

Coincidentally, I'm allowed to use 10 round mags to hunt with. Seems like every state has different requirements so you'd have to check with yours to see what you're allowed to use.

Also, you'd need to check to make sure that you could use a modified mag that has a stop/limiter or whatever to block it from taking more than your legal requirement, or if you have to use a permanent magazine that can't be converted back to a higher capacity.

Some places are funny about that.

This one was drilled all the way through it and a roll pin put in place to block the follower from going below that point, and thus limiting it.

I have also limited magpul magazines by epoxy gluing a popsickle stick in the bottom of the follower. Magpul now makes their own 5 and 10 round pmag limiters that you can buy, but I did this well before they were doing that.

I have also see a few places that physically cut a portion of the bottom of a pmag body off and do it that way as well.

Or you can just buy a magazine in the capacity you need, but the low-caps are usually more expensive than the 30's.

Global Moderator
Sponsor
Moderator
You know, the requirements here is something I have yet to do... I have no idea why I've put it off this long.

Incedentally, and i need the pics yet, the D&H magazines I ordered from Palmetto State Armory (PSA) have the CAGE number on the side of the magazine near the bottom, the floorplate is stamped with PSA's logo. There are also two sets of "hash" marks on the magazines, about midway up, pretty much in the middle.

I'm really happy with both my D&H and Magpul magazines.

Staff member
Administrator
Global Moderator
I looked at your state reg's for coyote hunting with a rifle and didn't see any limits, so you may want to check yourself. Looks like you may be able to use any magazine you want and you may not have a max capacity for hunting yotes like I do. They have a contact us tab. I recommend that.

Global Moderator
Sponsor
Moderator
Thanks for adding the pics showing how you limited the magazines John, and for the link too! I hadnt seen a limit either!

Here are my D&H magazines.

This is what I thought was a CaGE number, but after lookin at yours again I'm gonna say it is not. 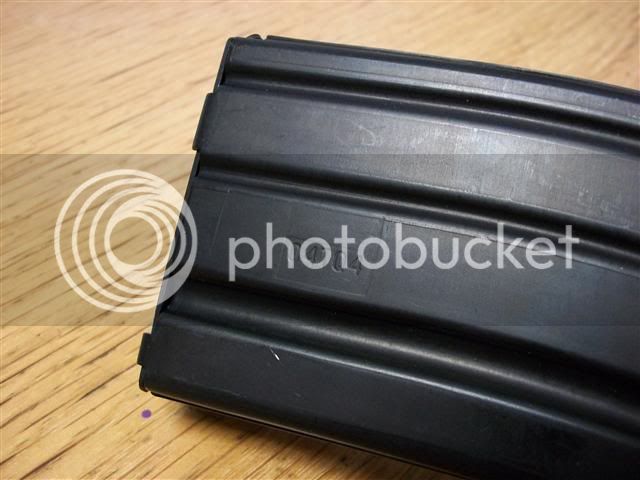 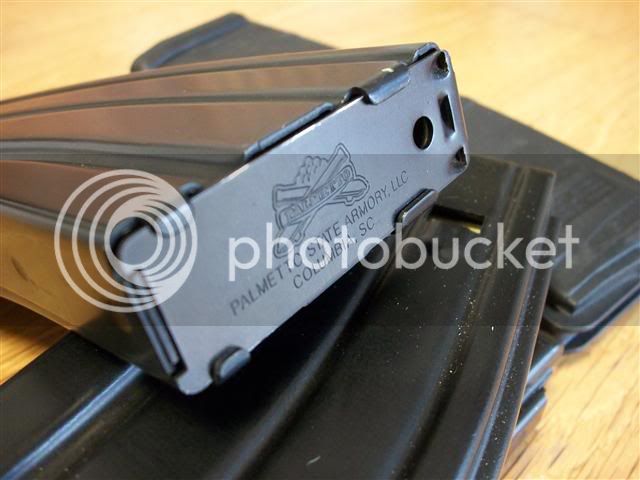 And the "hash" marks I mentioned. I have no idea what these are... 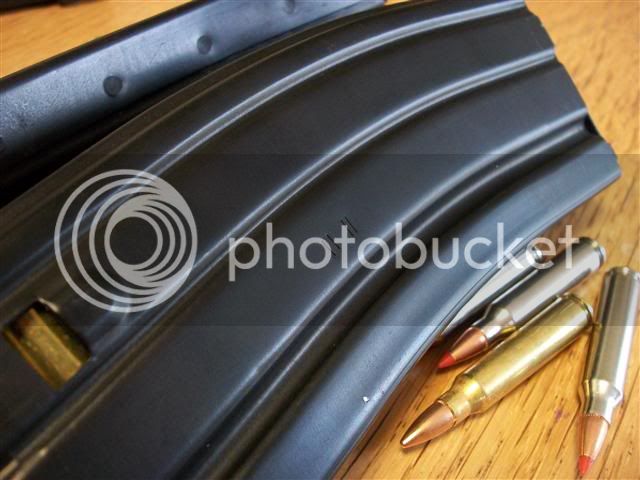 Here are just some other comparisons. I wanted to show the PMag with the cap too. 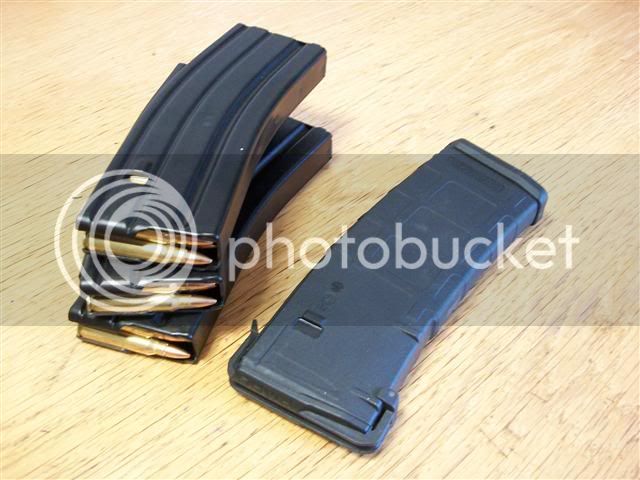 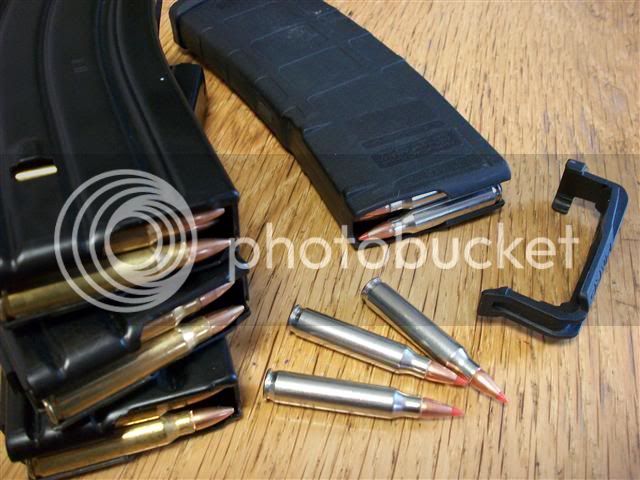 The cap will also attach to the floorplate. 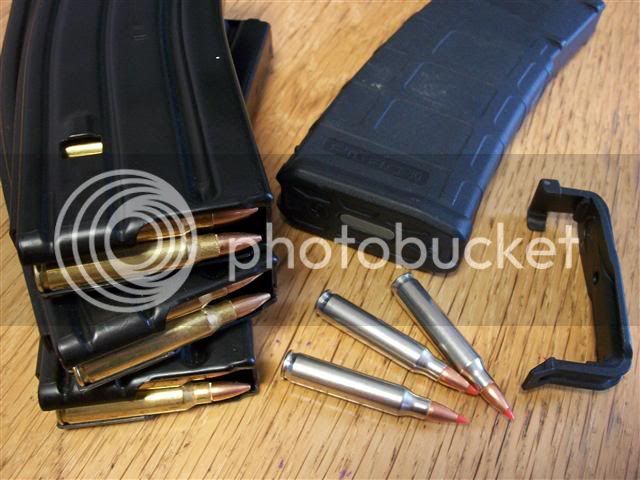 The PMags are actually a bit taller than the GI magazines, even without the cap. 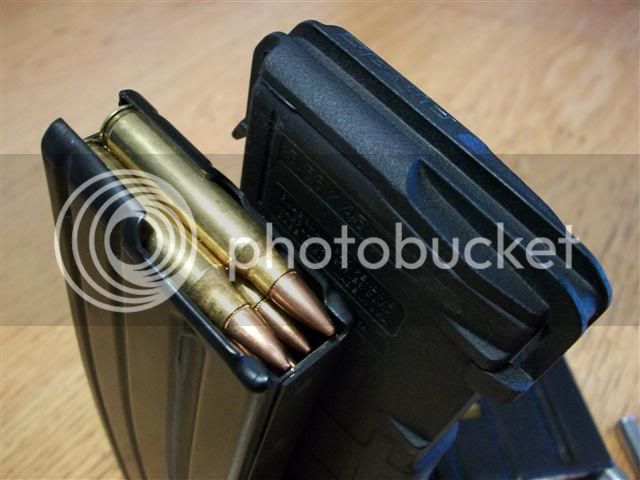 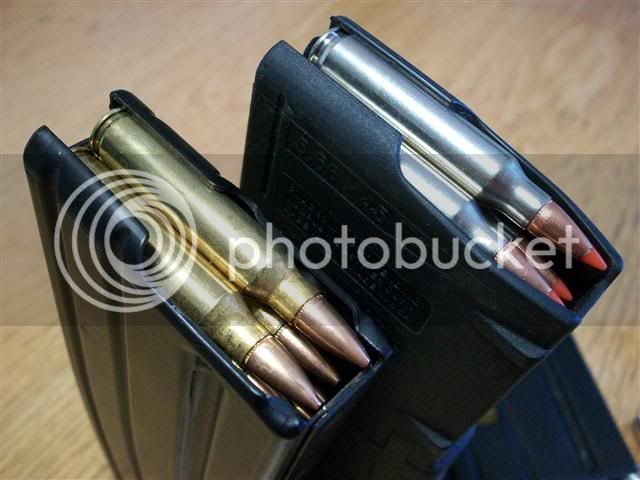 This is what I thought was a CaGE number, but after lookin at yours again I'm gonna say it is not.

Actually, that is a cage number.

If you look at my earlier post under D&H mags, if you look at the floorplate, you'll see that number on both the ban mag and the after ban mag floorplate. Looks like they just moved the location.

And I don't know what the hash marks would be for either.

Something I really like about the PMags is the perception of the magazine being more form fitting. You and LES were able to show it better than I did, but there are the ridges on either side on the inside as well as the ridge between the stacks on the inside center front.

Like i said, perhaps its just the "perception" given by the fit and finish. Nothing wrong with the USGI as far as I can tell, but the polymer PMags rattle less and something about them feels more solid, and the look is modern.

Staff member
Administrator
Global Moderator
I too really like the Pmags and I understand why so many others do to.

But I have had some bad experiences with other polymer magazines with the body swelling when fully loaded, feed lip distortion and feedlip wear/breakages due to the bolt riding on the top of the feedlips and why I think owning a mix of magazine types (GI and magpul) is healthier than putting all your eggs into a plastic basket.

I think magpul addressed some of that issue with the cap/cover they include with it, but is still a direct flaw when it all boils down to it.

And besides, the last thing I want to be doing is fumbling around trying to remove a cap to get it in the magwell if I am under fire.

Just ask any guy who owns a full auto M10 or M11 what they think about factory zytel (polymer) magazines and you'll probably get an ear full. Here is a pretty good page on the subject. http://www.mac-11.net/zytel.htm

Magpul have been selling these since around 2007 I guess, and only time is going to tell how the long term durability is going to be. And I assume a lot of that is going to depend on how individual people stored them.

But while they're in spec, they're undeniably in the top percentage of mags.

But the longevity of such can be debated until the cows' come home. Here is a photo of a Pmag that I have already had to sand the side of to get it to drop free. This mag was just made in Sept. '08

I hadnt previously tried using the factory magazine that came with my Oly AR. But I figured heck, why have leave a magazine unloaded.

So, right off the bat, it doesnt have the anti-tilt follower. (I'll get pics of all this when I'm able) I loaded it and seated the magazine in my rifle, pull the charging handle back and let slam home. Safety off, sights on target, pull the trigger... "click". Nothin. Safety on, release the magazine, slowly open the action and saw there was no round chambered. Reseated the magazine and pulled the charging handle back and watched to see if it was catching the round to strip it from the magazine. Didnt even touch it. No idea why.

I unloaded the magazine which was a tremendous pain, it felt as if the rounds were in a bind from start to finish.

Loaded all the rounds into another magazine and not a single issue or snag the remainder of the time we were shootin. We fired Federal bulk pack ammo, TulAmmo steel case, Federal XM193, AETAC223, and AE AR223 (which is identical to the AETAC223 black box but saved me 2 dollars a box) We fired from the PMags and PSA USGI magazines pictured above. Not a single solitary problem otherwise...

Global Moderator
Sponsor
Moderator
John, I dont know, its the one that came with the rifle.

Supporter
"Philanthropist"
I knew this was here somewhere, do the follower colors always denote the type of follower. I just got some C Products and the follower is black....these are new. The follower seems real secure and steady...of course haven’t used them but as hard as I can try I cannot get the follows to cross up…or the nose dive effect like Johns pictures……do you just slide the floor plate off of these to get them apart ?

these mags have no dates, cage numbers,hash marks....nothing but C Products Defense Made in the USA on the floor plate. Springs are real stiff but I am not used to AR mags so.....dunno

What I've seen, USGI mags have a green follower which is ok, but not the best and are more likely or prone to binding than the improved followers.

The floor plate should slide off and I've seen the Magpul kits to replace springs and the old followers with improved anti tilt followers. I think they're sold in packs of 3.