I am on my way to buy the 3rd and 4th Marlin 795 22lr rifles. I bought the first two 1 year ago for $75.00 each. I would have bought all four at once, but Sports Authority only had two in stock at the time. The next two are for $129.00 each, also from Sports Authority. They are matching Academy's price. (Academy ran out of the model)
I searched high and low for a better price, but did not find one. I seriously doubt they will offer them for less than $100 anymore.
I have four sons and am buying for their future. By the time they leave home, they will each have a Marlin 795, A.K gp-75, and Maverick 88 12g. (at the very least)( Along with the knowledge of state law pertaining to firearms, how to clean, hunt, and protect themselves with them.)
It is my experience that guns are an excellent investment. They keep their value and often increase in value.
What do you guys think of the Marlin 795? About sending your kids off toting their own rifles? About firearms being a good investment?

Sounds like your kids are lucky to have a great Dad! I really like the Marlin 795 but I am partial to the Remington 597. I think if your kids are brought up with proper gun safety there is nothing wrong with them leaving home with a few firearms. Firearms are always a good investment or at least that is what I tell myself every month when I decide to buy one.

I went with my inlaws to a flea market today.

Well, they found what they wanted. Private seller, a Marlin .22 auto with the inline magazine, older but really nice clean gun with a scope. Father in law found a 1960's model Marlin lever gun with awesome furniture! These rifles are in very good shape, barrels and actions all looked good and no visible signs of abuse or damage. In general, each were in very good condition.

Problem #1.
Marlin .22 auto. When we try and load the first round, it does mate up quite right with the bolt face, we arent ridin the bolt home, lettin slam as much as you can a .22. After some cleanin, it cycles a few rounds after you can get the first one. It tends to stovepipe and double feed and then the rounds have to be dug out and a .22 receiver is REALLY DANGED SMALL!

I cant figure out quite the issue there...

Problem #2.
The Marlin lever gun. Once fired and the action is open, the spent shell wont eject. You open the action and the bolt comes all the way back, but it looks like there is an issue with the ejector, it isnt kickin the cartridge out, it just kinda lays in the receiver till you "surf" it out. You have to roll the gun. It cycles ok, but hangs up in the middle of cycling when tryin to chamber the next round.

I sprayed some Hoppes cleaner in each and am hoping the biggest issues are resolved with some cleanin.

Anyone have any ideas here? Thanks!!!

My fiance has a Marlin Mod 60 and it has the same problem. I did a VERY good cleaning and it seems to solve it for a little while. Also, keep that sucker lubed up good! As for the Lever-gun... try and replace the ejector? (I don't know if they are the same now or if that part is floating around still)

A little more info on the lever gun;

Its a Western Auto Revelation model 207 made by Marlin. I'd like to find an exploded view or parts diagram to compare with the rifle and see if anything is missing, like a spring or something. That ejector seems to just lay flat while opening the action and doesnt really contact the spent case and then it looks as if the bolt hangs up on the aft edge of the ejector.

Have you tried Numrichs.com?? they have almost every gun part and blue print/technical manual you could wish for haha

I did!!! I found it, I had to cross reference the Western Auto/Revelation with the original manufacturer which actually happens to be ... Mossberg! So I found the corressponding OFM model number and was able to find the ejector and spring assy. for $13!

There we go haha they saved my ass more than once when I explored the Mossberg 500 trigger assembly...

They literally have near everything you would need to replace a factory part! Helped me fix a Glenfield model 25 a year ago. Bought all the parts I needed to get the magazine working and seating right in the mag well! Great site


Rossignol said:
Problem #1.
Marlin .22 auto. When we try and load the first round, it does mate up quite right with the bolt face, we arent ridin the bolt home, lettin slam as much as you can a .22. After some cleanin, it cycles a few rounds after you can get the first one. It tends to stovepipe and double feed and then the rounds have to be dug out and a .22 receiver is REALLY DANGED SMALL!

I cant figure out quite the issue there...
Click to expand...

I have a marlin glenfield model 60. it had been sitting in my brothers closet for about ten yrs. rusted up good. so i let it sit in wd40 for a week. took a 3m pad to it, and filed down some rough spots on the bolt where it was catching, lubed the mating 2 areas where it touches with grease, the thick stuff. then lubed it up. bought a new tube spring, and once i found out it need to be cocked quickly, i had no problems after.

Hmmm, I will mention that to them, Thanks for the info Mr. RipJack!

In all reality, it will sit till i get there to break it down and clean it. 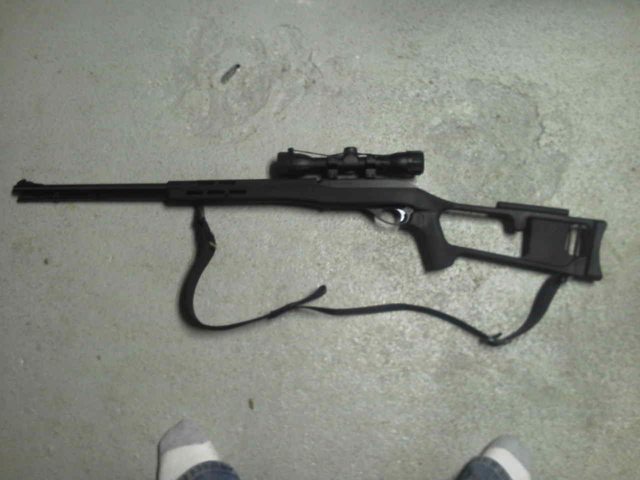 Allison loves her .410, I think Mrs. RipJack would too!

Holy Smokes man!!! Youve seen me make reference to Allison, my daughter, and how much she loves hers! Shes a great shot and the .410 is a lot of fun for me too! In fact, everyone who fires it, loves it!

Hers is the fixed full choke VR barrel and she uses 3 dot rifle type fiber optic sights with it. She wont part with them anytime ever I dont think. Theyre made by TruGlo, the ultimate turkey set. She used these to get a quail before I did last year.

Another short story;
We had put a milk jug full of water up at about 35 yards. I was shootin Remington full power slugs for the first time. I usually shoot low recoil slugs like Winchester WinLite and Ranger, or Fed TruBall. My gun groups the low recoil stuff low and left and so thats how I held on the milk jug. I loaded on round and fired. And missed.

I was kinda put out that I missed, which I almost never do. I loaded another round. And I missed again. Allison was put out with me after missin twice so she loaded a singular round of Federal 4 pellet 000 buck handgun loads, took aim, and blew the milk jug apart.

At 35 yards, she put a single 4 pellet load on target. I cant say every pellet hit, but the spread in pattern has never been bad. Some loads are pretty wide and I think the Remington HD 00 buck was among the worst for us.

Moral of the story, its a good gun and is easily handled!

Awesome! My Fiance won't shoot my 12 gauge, even with Low Recoil loads. I think maybe a .410 would be a great way to get her out on the range with me

There you go dude!

Show her some of our videos! You can see Allison at the old age of 11 shooting the .410! Theyre linked in my sig!

Awesome! I will give it a shot! Christmas is just around the corner
A

Have an older model 995.Looks exactly like the 795,I believe the difference is that the 795 has the bolt hold back feature (after last round fired).
Just thought I would bump this up as I just got 3 extended magazines (25 Rds.) for the 795 and it fits my 995 .
They are from Promag industries and are made out of black polymer.They also have drum mags for it,but are a bit pricey.The 25 rounders were only a little over $21.00 each.
Now if they only made them for my old Lakefield 64B model (now Savage Arms),I'd be a real happy camper
Hope this helps.
You must log in or register to reply here.
Share:
Facebook Twitter Reddit Pinterest Tumblr WhatsApp Email Share Link
Top