Re: tactical stock for 88

Just slapped the original ATI AR style adjustable stock on my 500. This one has what they call the razorback recoil pad. Have not had a chance to go test fire it yet but hoping to remedy that very soon. I love the way it feels just shouldering it though and most folks seem to speak highly of ATI product so I'm expecting it to meet my expectations. I would have considered the newer Talon but the shop I went too was outta stock so I opted for the older model. One thing I really did like about the product was that they included options for Winchester and Remingtons along with the Mossberg. So if I ever got one of those or decided to sell/trade this to someone else its a much larger market to offer it to someone else down the pipe. A big plus in my book. Somehow I think its gonna be a keeper though.

"Philanthropist"
Re: tactical stock for 88

Thanks guys! I think I'm going to look into the talon stock I like the looks of it! Also the fact that its made in the USA! 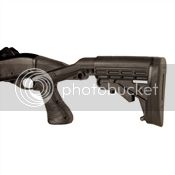 The first thing I discovered was how difficult it is to reach the slide release with a pistol grip! So, I ordered an Extended Slide Release from board member, "Shoten."

Can't wait to get it all back together and fire a few rounds!

I havent really seen much information for this thing as far as reviews... even outside the forum, a lot of people seem to lean towards the non folding stock. I was thinking it would be great because there are times I would want to hip fire with just a pistol grip, and times I want to shoot it with the stock on it.

I have seen some remington guys complain about the hinge hitting their thumb, but nothing from the mossberg crowd. I would love to see a video of it being shot. I saw one video of a guy in his living room, a russian shotgun with it sitting there, and one of a hot chick holding one on another shotgun.

Does anyone have this on their 88? Is it worth it or would you get the non folding version if you did it again? I really like the two tone grey and black one and I saw some good pics on this forum of it actually... but no real shooting reports or youtube vids.. all seem to have the non folding option.

Hey rashad, we'll let others comment and speak for the folding stock and other products to get their opinion. Just an FYI you can shoot both ways with our Talon stock as well, because you can swap to our Talon Pistol Grip by simply changing one screw.

Here's a link to that one for comparison, all of our stocks are mentioned in the destroyer gray you mentioned as well:
http://www.atigunstocks.com/mossberg-ta ... ystem.html
R

Hey I don't mind s biased opinion! Lol.. I haven't heard many at all! My question about the folding stock would be the hinge location...it appears that it would rub the top of your thumb while firing..

Also, would it be strong enough to handle the recoil from the maverick well?

And my last question, do all of your talon grip stocks have a built in recoil buffer system? It seemed there were numerous variations and I couldn't decide what I was looking at after ten minutes on eBay.

Sent from my SCH-I535 using Tapatalk 2

Well that's why you should browse www.atigunstocks.com instead! (Not to mention you are guaranteed the most up to date products) Our stocks have buffer tubes of course and recoil pads, but nothing that's spring loaded, etc. All of the stocks listed for the Maverick on our site will handle anything your shotgun can throw at them recoil wise so no problems there.

If you scan the threads on here or other sites I think you will find that the hinge is not an issue for most users, but some with larger hands prefer to go without one. We recommend our newer Talon line to most customers unless they plan on using the side-folding mechanism often. As we stated before it comes with a dedicated pistol grip if you'd like to swap to that from a full-stock.

You can feel free to email us at socialmedia@atigunstocks(dot)com with any more questions!

Re: tactical stock for 88

I'm liking the Kicklite - saw some good reviews on youtube....not that I have a shotgun...yet lol

Cutting down the stock

I want to shorten my LOP on my maverick 88. i would love to by a collapsible stock but the funds are not there right now so im looking for a cheap temporary alternative until i can afford one. i researched this a little bit and measured from my nose to thumb and i have live 3 1/2 inches between. im thinking of shortening it about 1-2 inches. my only problem is reattaching the stock recoil pad.

does anyone know if i can reuse the existing holes and just sand/grind down the recoil pad to match? or if i can just get one of the slip on limbsavers and will that work? if i go with a limbsaveer i might get one small enough for the youth model since that is basically what im making it. any thoughts or other ideas?

You shouldn't have a problem with the old pad. If you do the Limbsaver's are great.

Keep us posted on your project.

Cool that's pretty much exactly what I want to do. Is that bottom pic before or after you cut it down? Slightly different angles I think are playing tricks on my eyes making it look like before.

And are you still using standard pad under the limbsaver?

I did it in two cuts just in case to measure the LOP between cuts.

I didn't put the old pad back. I'm using just the Limbsaver slip on. Works great.

The angle is the same as factory. I kept the pitch the same,zero.

Awesome. Thank you. I wasn't sure if it would work or not so thank you very much. Should be able to do this soon. Maybe a week or two. Will post pics after.

So I went ahead and cut down the stock. Ended up only cutting down 1 inch instead of two. So now I have a 13 inch LOP.

What I started with: 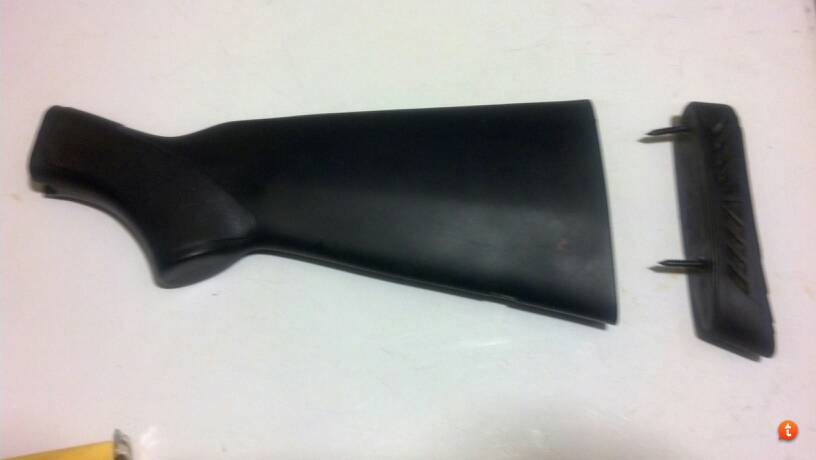 Cut the inch off and decided that was good. 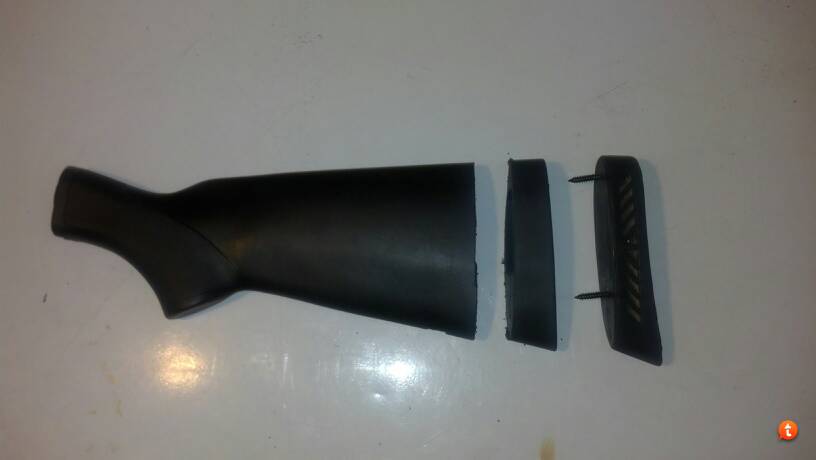 Reattached stock buttpad. It over hung a little on the bottom. I was able to drill further into stock holes to reattach it. 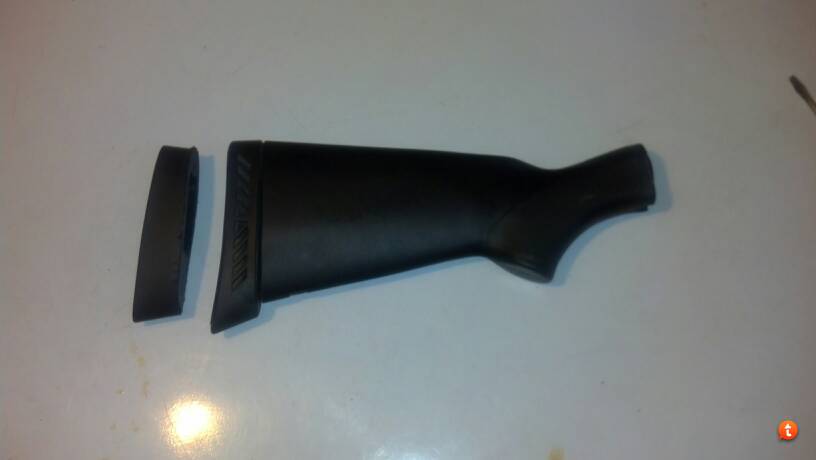 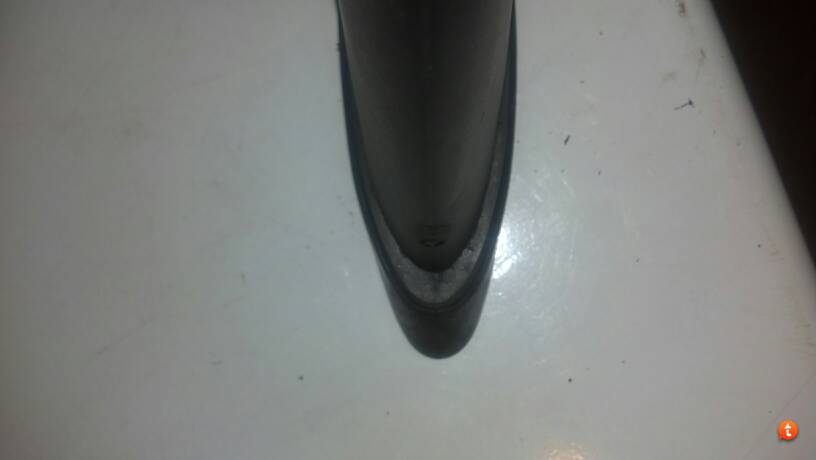 "Philanthropist"
Re: Cutting down the stock

Could always shape it? But it came out pretty good!

You could always get a "grind to fit" or slip on Limbsaver if you want to make the recoil pad even all around.

thanks. i will probably get the slip on limbsaver later, for now it will be sitting with a slightly over sized butt


squid86 said:
thanks. i will probably get the slip on limbsaver later, for now it will be sitting with a slightly over sized butt
Click to expand...