This is the process I use to make the broadheads that I hunt with.
I use 125 grain field points and reshape them to remove the shoulders. this step may not be necessary buy It looks nice.
the blades are cut from a .039 thick bandsaw blade. 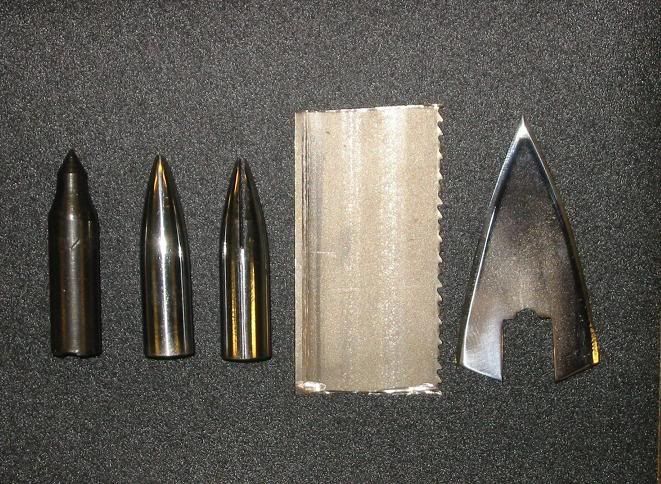 the jig for slotting the field point is made of steel and clamps the point while the spacer (piece of hacksaw blade) Leaves room for the saw to pass between the two halves to cut the slot. 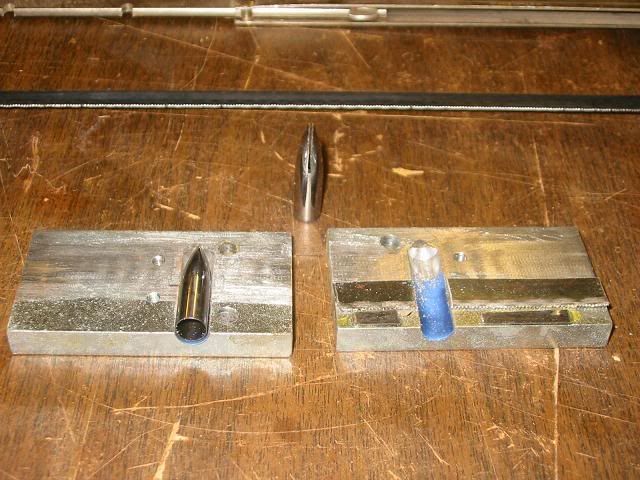 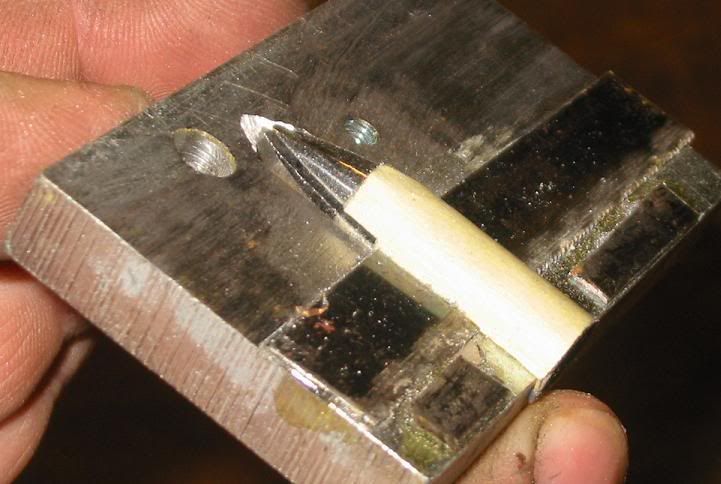 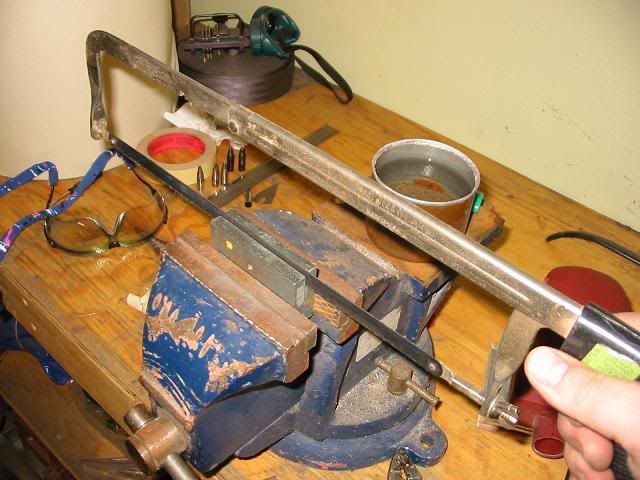 I then polish the two pieces and make sure I have a good fit up. 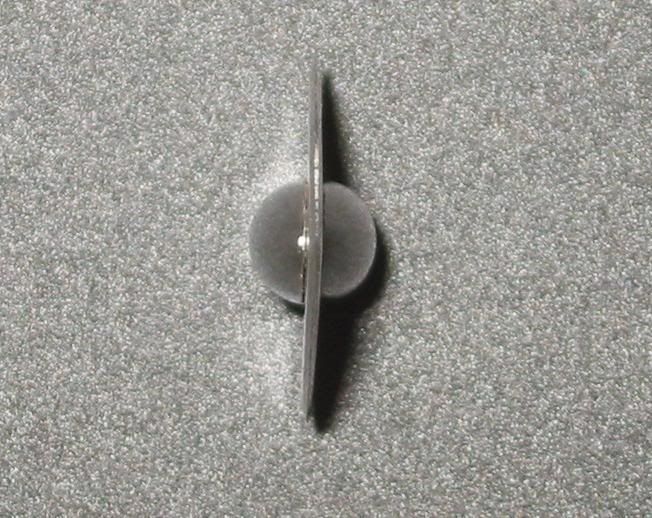 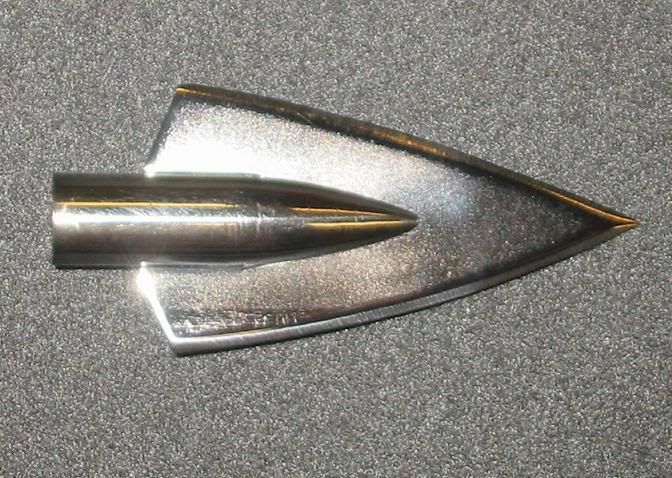 Next I braze the two parts together although I think solder or even J.B. Weld would suffice. I may try this on the next batch because brazing is messy and I have to quench afterward to make sure the heads are hard. 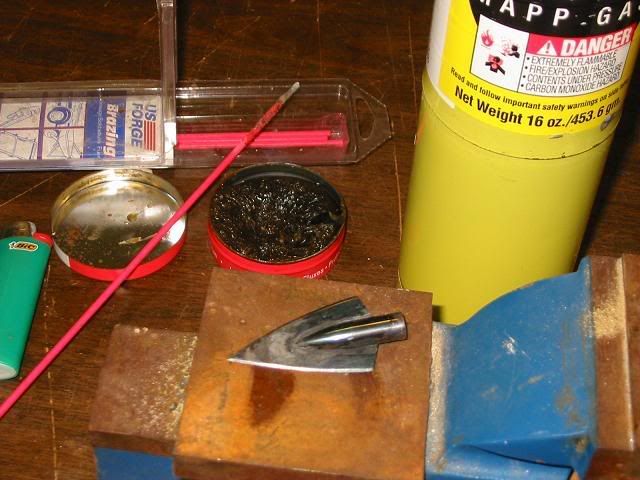 After cleaning and polishing again, I use a cold bluing to protect the heads and then a light coat of oil. 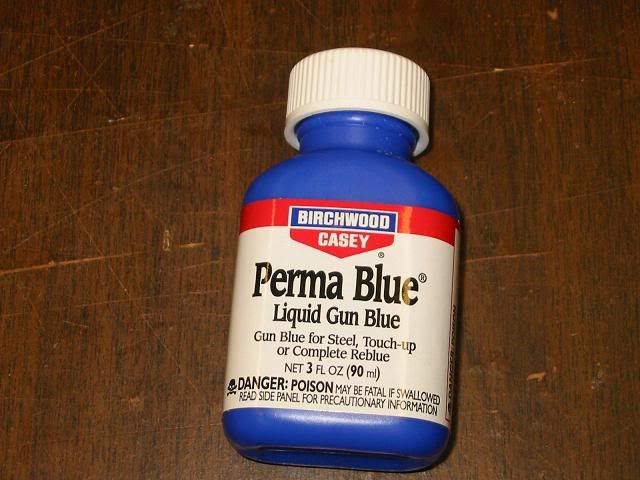 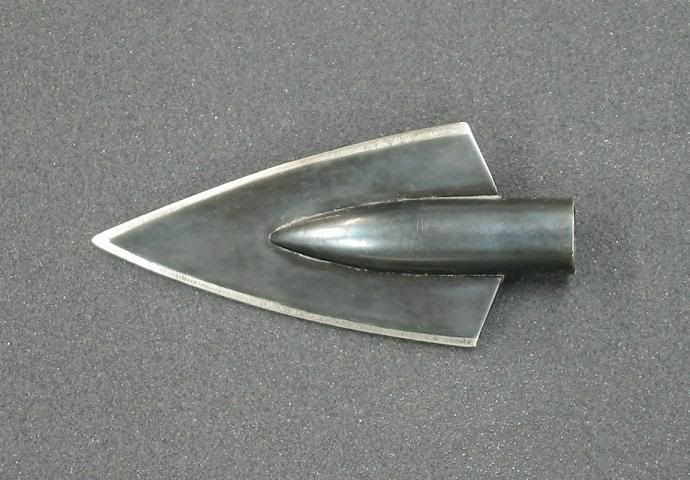 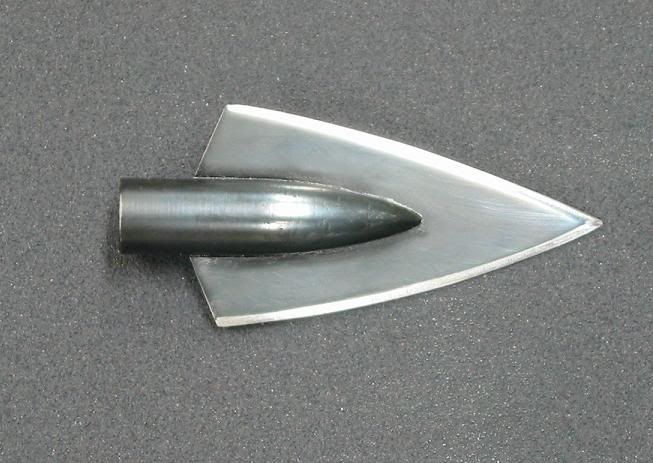 After reading Dr. Ashby's report on single bevel broadheads.(right after I finished the last batch of double bevel heads) I just had to make some single bevel heads. It just makes so much sense. I will test both to see if I get his results. 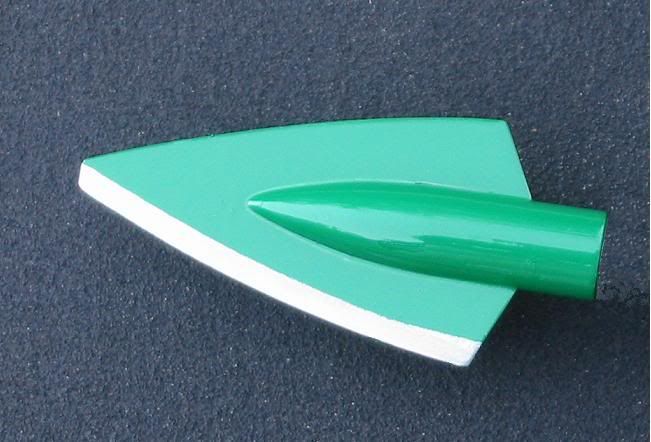 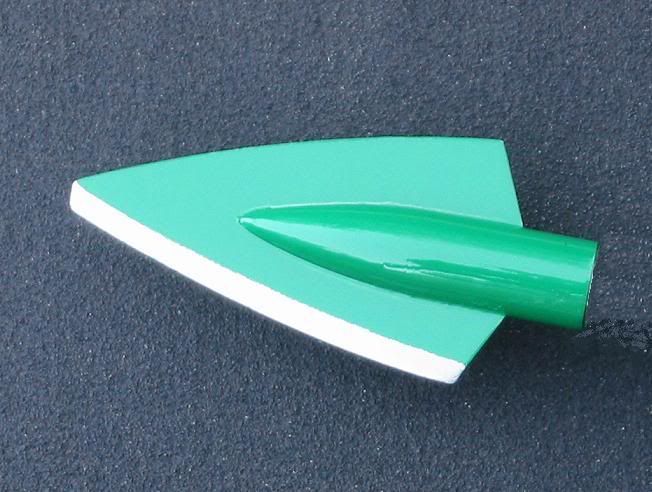 After making the first set of single bevel heads, I made a new set with a longer profile.
Then I fooled around with a longer version. 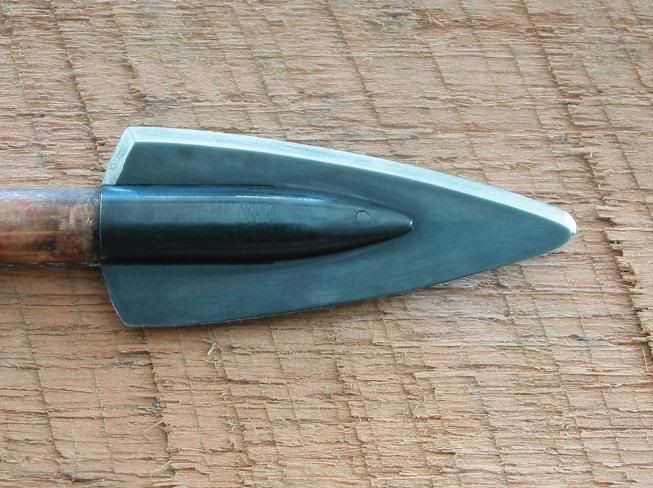 This is the latest design and the one I hunt with now. 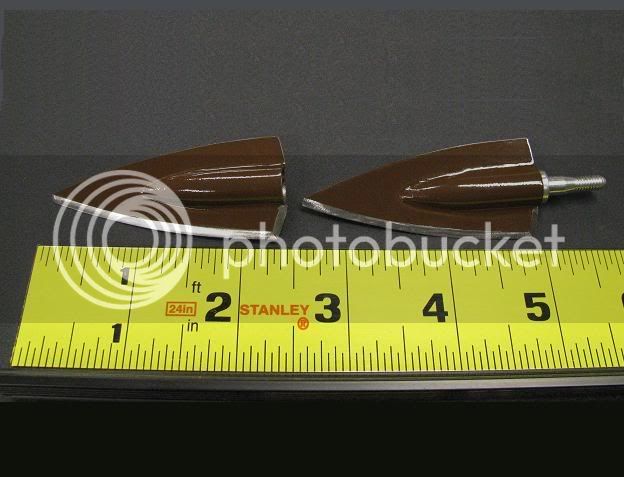 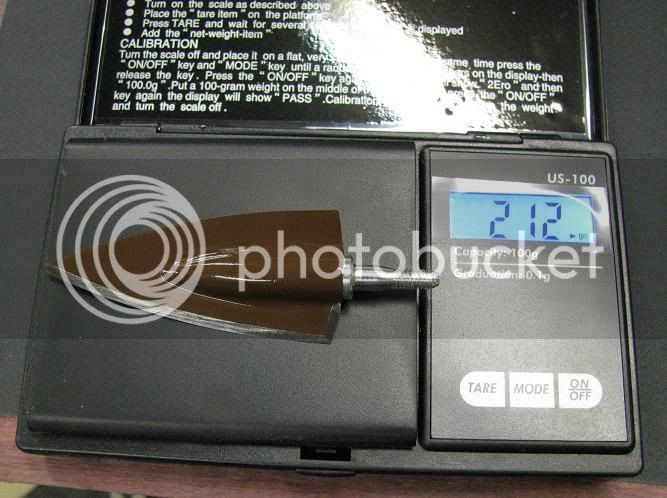 As luck would have it, a neighbor brought me a fresh archery kill to process for him. I asked him if it would be ok to test my heads on his deer. He didn't mind since he wanted the whole deer ground into sausage and/or burger. So here she is. All 68 pounds of her (dressed) I would have loved to be trying this on a 150 pound deer but beggars can't be choosers. 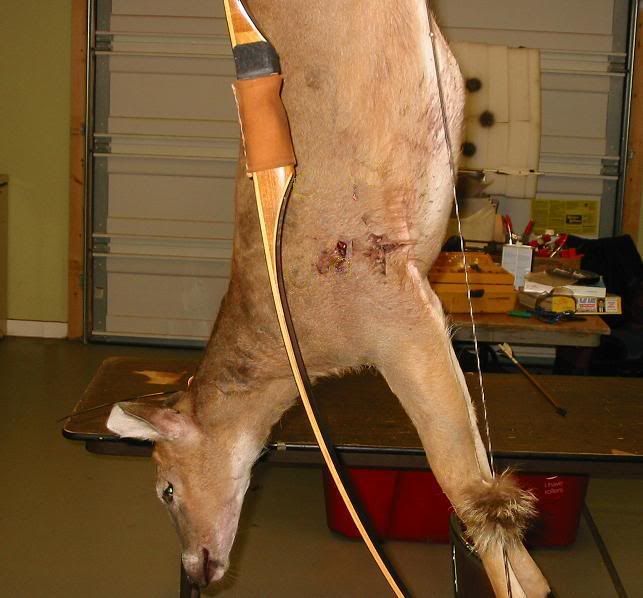 I made three shots from 10 yards with my 45 pound longbow that shoots an arrow at a blazing 142 FPS. the first two were through the ribs and the final one hit the shoulder blade at the point where the flat and the "T" meet, right near the ball joint. This is (in my opinion) the largest and thickest bone section in the upper shoulder. I admit that hitting this far forward is not a good place to aim on a live animal but things happen beyond our control. I of course hit this spot with pin point precision on purpose. 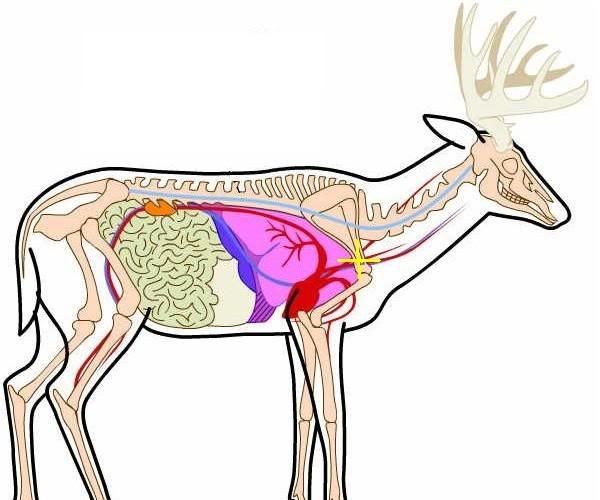 The rib shots were complete pass throughs but the shoulder shot ended up with just the fletches sticking out entrance side. I know there were no lungs in the deer but they don't offer much in the way of resistance any way. Also consider that this deer was cold and stiff as rigor mortise had set in so I consider all things equal. 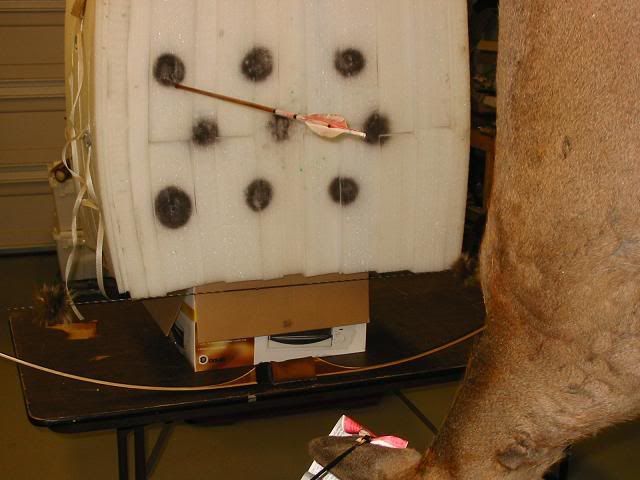 Right off the bat, I noticed the "S" shaped cuts that Dr. Ashby had spoke about. This was the case on both the entrance and exit holes. 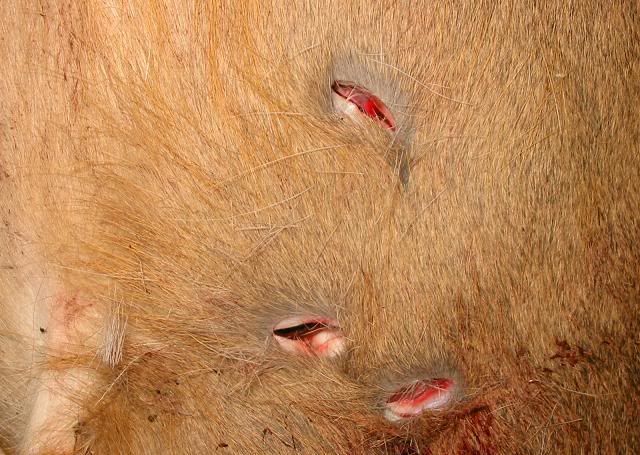 *** Word of caution***
When you pull the arrow back out of the deer (through a bone) and you have sharpened your broadheads on the trailing edge as well as the main edge. Make sure to keep your fingers clear even though you need to hold the deer steady while retrieving the arrow. 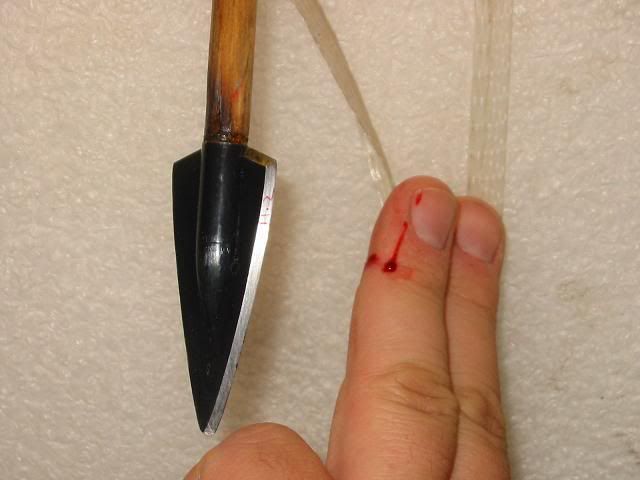 After a brief bit of first aid, I began to skin the deer, I noticed that both of the rib shots had completely missed hitting ribs on both sides. My goal was to break a rib to see the results but I must have used up all my luck..... I mean skill on that shoulder shot. 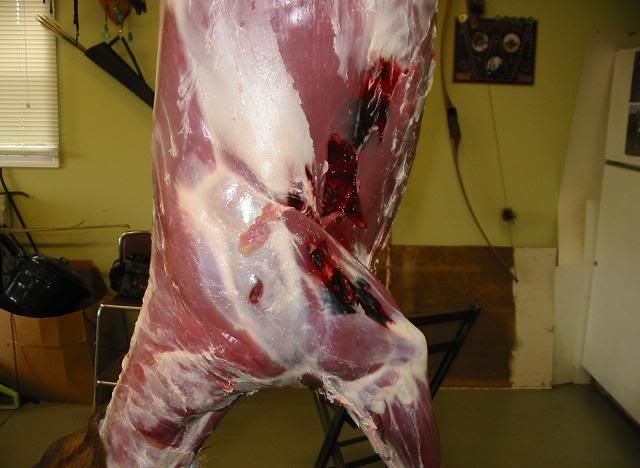 I then removed the shoulder and boned it out. 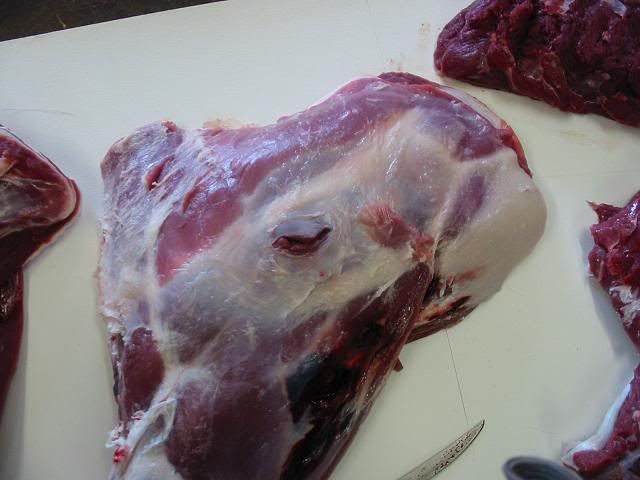 Just as described by Dr. Ashby, the "S" shaped cut and the bone had split completely being held at the joint end by only some soft fibers. 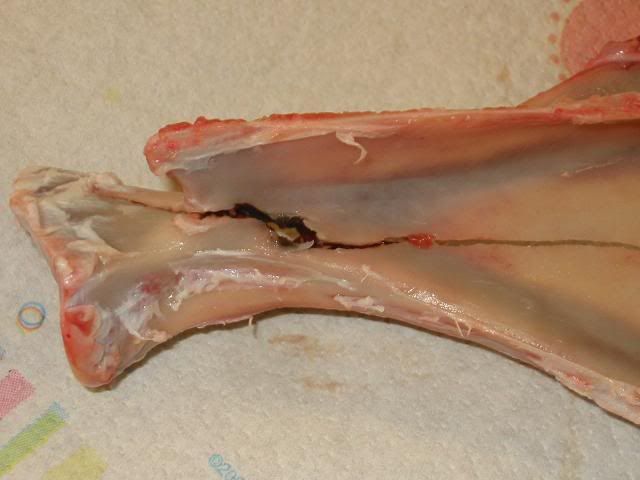 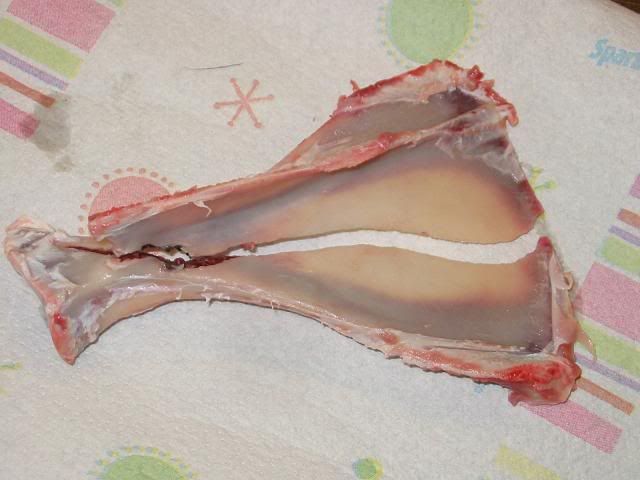 As expected, the single bevel head is a real bone breaker/splitter. I know this is a very small deer but again, I was using a rather low power bow. Take from this what you will but I am even more pleased with the single bevel heads. This sort of thing is not necessary with todays super fast and powerful bows hunting whitetails but for those using traditional archery gear, or those going after large or dangerous game, we are looking for every advantage we can get

Very nice. Traditional Archery has always been my first love.

Some of my homemade broadheads (points).

I truly respect anyone that can do that.