Mystery device!Maybe one of you guys?

My daughter found this screwed to the garage wall when she moved into her new house.

Maybe one of you guys can ID the logo or something? 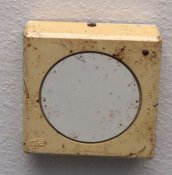 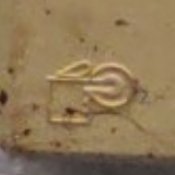 I let Google lens search on both images, but didn't receive any viable results.

Premier Member
A photo eye for a garage door opener?

Possibly, but not for the one that’s installed there now.

And it doesn’t look like a photo/optic device to me.

Take it off the damn wall and send us a pic of the back side! I gotsa know!

Moderator
"Philanthropist"
That sure is a lot of bug poo while the painted wall is almost untouched....

Well, My granddaughters are having a birthday party next week.

I will have to drive down to Visalia and see my kids then, and I will take it down and see.

Evidently, when they painted the garage they just took it down and put it back up. It appears to be as old as the house.

Staff member
Administrator
Global Moderator
"Philanthropist"
@CaddmannQ when they pulled it down was it wired?

It kind if looks like a housing for some kind of meter. If its in a garage could it be an old carbon monoxide detector?

Without more info I'm out if ideas

Premier Member
It’s a button of some sort. The logo is of a finger pressing a button. How big is it. Put a shotgun shell near it so we have some sort of scale.

Moderator
"Philanthropist"
Is it located where a typical garage door opener would normally be?

I don't think it's a light switch and it (to me) does not look like a sensor.

I'd try to find the breaker, take the mystery device out and see if something doesn't work anymore.

FWIW, when I moved into this house, the electrical wiring was rather retarded. It took me the better part of 3 days to figure it out. And another 3 days to fix it.

I even found one slot in the breaker box (with a 30 amp breaker) that went to....

You guessed it. A single exterior light at the back door.

Seriously. That was the only thing hooked to it. Since I was removing that light to build the addition anyway, that freed up at least one slot in my old 100A box.

And there are two old school knife switch fuse boxes in the basement where they spliced wires. I always said I was going to take those out and simply put in a junction box and splice those together, but I never have. I guess if it ever blows the fuse that's rated 10 amps higher than the breaker in the box feeding it, I will.

Cadd posted this on another forum and one of the members tilted the logo 90^ CCW and it is a finger pushing a button. So perhaps a "big" button to open a garage door?

Yes, I did that over at Shop Floor Talk, and somebody told me this is the old Genie logo.