Need info on making some hardcast

Staff member
Administrator
Global Moderator
Good evening guys. Temps are cooling down and fall is in the air. Which spring and fall is my favorite time to sit down and cast my own bullets.

This year, I'm wanting to do some in hardcast too, but having never done it, am unsure exactly what, or how much I need to add to my pot. Pretty sure adding solder to the pot will work. But, how much is my big question. Is there an easy way to check hardness or is there a specific tool for that?

I also have some ingots of reclaimed bullets that I have melted down that surely had some hardcast in it too. Lot of it's pretty shiny.

I'm definately wanting to do some 10mm hardcast for deer hunting if I don't get one with a crossbow before rifle season starts.

Thinking of some 230 gr round nose 45acp hard cast since that's one of my main grabs for HD and I'm loading them spicy. And also some hardcast for 357/38 and 9mm.

Another question for the hardcast 9mm. I'd be using a 158 gr 357 round nose mold to make the heavy 9mm subsonic pills, then will run them through a 9mm sizing die. I've shot those bullets out of a couple of my suppressed guns with straight wheel weights and didn't have any problems. Or would you suggest I skip the hardcast for the ones I intend to size down and just keep using the softer wheel weights for them?

Everything except the slugs will be powder coated too when I finish.

A couple/few years ago I got about 500lb of misc lead at auction cast in in corn-shaped ingots using a muffin tin. Unsure of the hardness, I bought a set of various hardness (darkness) shading pencils from office depot. You scrape or write to determine the hardness of the lead and alloys included. I sold off the lead and forget what "hardness" I determined it was. A gugle or gootoob search will give you more enlightenment on the procedure...

I'm not 100% positive about this, but I think solder (tin) is used more for fill-out of the mold than for creating a significant increase in the hardness.

Linotype, on the other hand, definitely raises the hardness.

And remember that heating your bullets during the powder coating step might actually soften your cast lead. Something to think about.

Lyman prints a whole book dedicated entirely to cast bullets and goes into great detail on hardness. Used copies are plentiful and cheap.

This is the set I picked up. Think it was around $20 at the time from OD. LINK
The concept is that you rub different grade pencils on the lead to determine hardness using a chart you find online. If the pencil digs in the lead, it is harder. If it writes on the lead, it is softer. 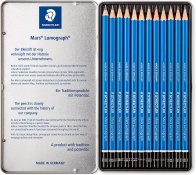 I think I have a couple pounds of linotyppe out in the garage (somewhere...)

Staff member
Administrator
Global Moderator
That's very kind and generous of you and I appreciate the offer more than you know.

I was digging through my ingots and found several that were made from reclaimed bullets that we dug out of the backstop and looking at them, there's several in there that appears would work for hardcast. Or at least much harder than the wheel weights I normally use.

So, again, while I appreciate it, I think I can make due with what I have for the time being. I'm mainly wanting to make a couple handful for upcoming deer season.

Most people are encouraging me to use hollow points, but I don't want to go that route. I'm wanting something that will punch through both sides so I don't have a repeat of year before last when I was unable to recover one. So, I'm wanting some hardcast for that.

If one of us don't get one with the crossbow before then, we'll be using the 10mm carbine for modern gun this year. I've heard a lot of good for it. And some of the bullets I've loaded so far, was well into the 1550+ with 175 gr bullets so it should do well at ~25 yards or so.

And with the hornady hollow point xtp's that weigh 155 gr, was getting 1770 fps with them. While sounds great on paper, I still think I prefer a hard cast semiwadcutter like the ones below. I think that would give me the best chance to make it all the way through. I'd rather have 2 holes than one.

I started loading up some this morning with some standard wheel weights but started having trouble with my Lee pot. I ended up having to drain all I had in the pot. I got some junk down around the arm that wasn't letting it close and nearly had a catastrophe.

But, I've got it set up again waiting for tomorrow and will be using some of my reclaimed lead for those.

Here's what I was able to get this morning before having technical difficulties before powder coating them. 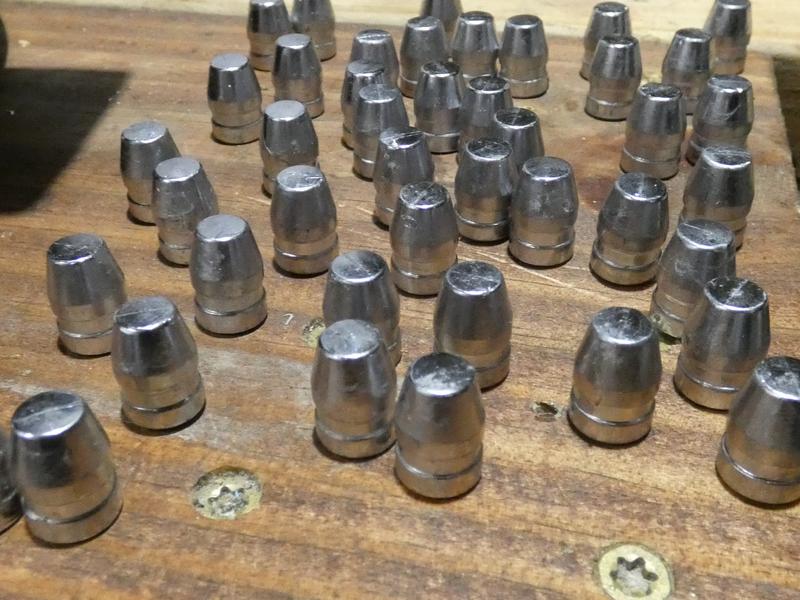 Hey nitesite, I powder coat my pills and after I softened them the first time I did some research and now I water drop them straight out of the toaster oven and they retain the hardness.

Staff member
Administrator
Global Moderator
I had never thought of doing that Eddie. Thanks for the idea.

I plan on casting some more tomorrow Lord willing. I'll try to do that.