Great to see them enter the AR market, or so I thought.

I wouldn't pay close to that MSRP when proven platforms like Stag's and RRA's are available in the same price range, and in true AR pattern. With the great price on Mossberg's shotguns and Tactical .22, 702, etc. I really expected these ARs to be in the $450 range.

Being a Mossberg Tac .22 owner and knowing how far off it is from even looking like an AR is enough to keep me from taking a chance on the MMR. I love my Tac .22 for many reasons, but an AR it is not.
M

Even with volume buying, I don't think any manufacturer out there could afford to package a complete 'AR' anywhere close to that price. Parts alone would cost that much - without adding in all of the overhead that goes into marketing a completed piece. Good luck to anyone who thinks they can.

The 'most affordable' AR that I can remember was probably the Olympic Arms Plinker (often given the nickname - STINKER). One of their major cost savers was by utilizing 'cast' rather than forged receivers. While many had no problems, there were quite a few that found their receiver in pieces after firing rounds. There have been others in the upper five hundred to six hundred dollar range - but most were often discontinued to save the companies money - they didn't sell well.

You might be able to find one close to that price point - but chances are it might be a 'mutt' that someone has put together from parts and pieces of other 'mutts'. Or it may be an import, and then you take chances on fit and function - not to mention interchangeability of other parts.

For $450, you'd be better served looking for another .22LR version of an AR, buying an AK, or saving up a few more $$'s and getting whatever it is you think will meet your needs.

My first AR was one of the old Olympic cast plinker A1 car's. And I think I have seen that picture you're talking about posted a half million different times on various forums.

I used that gun a lot and never a problem with it.

Just FWIW, they discontinued using cast receivers entirely 5 or 6 years ago. The newest Plinker model is a flat top and has forged uppers and lowers just like everyone else. I have seen them selling in the lower $600's on gunbroker lately.

I think that's a pretty good deal for what it is. Especially with the lifetime warranty.

I'm new to the AR market myself, and only know what I've read in this month's G&A about the Mossberg rifle, as it is featured. The author of the article is Dick Metcalf, and regardless of what anyone might think about him or his reviews, one thing is clear... he's been shooting these rifles about as long as they've been around.

Says he was issued a first generation M16 in 1968, and has been shooting them continually in military and sporting configurations ever since. Mossberg even asked his opinion about the necessity of including a forward assist prior to manufacturing the rifles. Concerning the absence of a forward assist, he said in the 40+ years he's been shooting the rifles, he's had occasion to use the forward assist exactly TWICE... and neither time did it do any good. He's essentially saying it's useless.

"I can be a pretty harsh critic of today's new plethora of AR-platform rifles. I've used AR's for a long time; I know what they're capable of; and I know how easy it is for a company to turn out a slip-shod, fast-to-market product. The Mossberg MMR's are anything but. I like these guns. I'm an AR guy, and I'm gonna own one." - Dick Metcalf

As for the pricing, that is something I know a little about. It's common knowledge that virtually every gun sold actually retails for considerably less than its MSRP, usually hundreds of dollars less. Let's consider the Colt AR's that are being quoted as selling for around $900. The MSRP on Colts ranges from $1155-$1775; so if people are finding them for $900, that's $255 less than the MSRP of the cheapest Colt AR. Given those facts, it's reasonable to assume that Mossberg AR's that list for $885-$922 MSRP, will actually probably cost between $600-$700 on the retail market. And if that's the case, it's definitely worth taking a look for buyers on a budget, like myself. There's a .308 due out soon, though; so I think I'll wait until that's available.
J


mister_e said:
For $450, you'd be better served looking for another .22LR version of an AR, buying an AK, or saving up a few more $$'s and getting whatever it is you think will meet your needs.
Click to expand...

Nothing wrong with mutts.
My brother had a Bushmaster upper with UTG free float quad rail on a Spikes lower with a DPMS trigger group. Can't remember what other brands were thrown in there, but it was a very reliable and fun build for under $600 (some trades involved).
M

Never said there was anything wrong with mutts. My best AR's are 'mutts' or 'garage builds' as some so affectionately call them.

What I was referring to is that for $450, it would be extremely difficult (if not impossible) to go into a store and buy a 'new' AR.

The exceptions would be - that it is one out of the 'bin' - that would most likely be assembled from parts of other guns. Even then, you would hard pressed to find one at that price point - if it was made from quality parts.

If you can find the parts for a build in that price range - then more power to you.

The average 'inexpensive' build will run you over $600 (retail) easily - if you are building it and not having to pay someone else for labor. But can still be done for a lot less than paying full retail for an assembled piece.

They had a Fathers Day Sale on the lowers that weekend for $50. Heckuva deal for a stripped lower.

But I don't think I could build an AR for $450 either. 10 Years ago wouldn't have been a problem, but factor in for inflation, I doubt it could be done now without scouring the net and using used parts from your buddies take-off's.
M

even the Palmetto would work out to $560 (not sure what shipping would add, or the transfer fee on the lower, +/- background check) without BUIS. So you'd still be over $600 by the time you got done.

^ ...and for that price you could buy yourself a complete stock DPMS, Delton, S&W, and the list goes on and on.
M


LAZY EYED SNIPER said:
^ ...and for that price you could buy yourself a complete stock DPMS, Delton, S&W, and the list goes on and on.
Click to expand...

Or better yet...buy one of the new Mossbergs, like the ones in this section of the forum, and let us know how you like it.

Honestly, I am anxiously waiting to get a good look at one. By the time they hit the stores, I have a feeling that we'll see a different price point, and that may just be the ticket that sells them. Or, there may be more to them than what we can see on a web or forum page, more than meets the eye - so to speak.

And even if they don't turn out to be the 'cat's meow' of zombie spankers :twisted: - it's all cool.

That means there is another roll mark to choose from, another flavor, etc. And if these 'shoes' don't fit you, there are more stores out there, keep on lookin'.

I'm definitely interested in getting my hands on one.

I doubt I'll buy one simply because I've got the bases covered with my Bushmaster varminter and assorted carbines, but I'd like to see how they finish out.

Wondering if anyone else has noticed this.... Why would they scratch out the dust cover on the hunter model?

That seems kind of mousy to me.

I've noticed several manufacturers omit the dust cover on some of their models.

Especially ones that are camouflaged.

But when I camo'd my build, I dipped the dust cover seperately so it would be camo'd whether it was open or closed, and then assembled it.

On the other hand, I haven't seen one of mossbergs' offerings up close, and it's possible that it's an extruded upper. (unverified)

If that is the case, it won't have ears that hold the ejection port door pin.

And coincidentally, an extruded aluminum upper isn't as physically strong as a forged upper either. :?

Weird, seems like a kinda sorta critical thing to have while in the bush hunting.

I also do not understand mossbergs reasoning on several aspects of their AR experiment. It is like they did SOME research, but stopped short on features and spec's.

It's like they thought that if it looked like an AR, everything would just fall into place on its' own and people would just accept it, but it doesn't work like that in the AR world. If the spec's aren't there, it's time to find another one that does have what it takes where/when it counts.

Then again, I build my own AR's based on my needs and expectations and I have the background to know what it takes to met those. 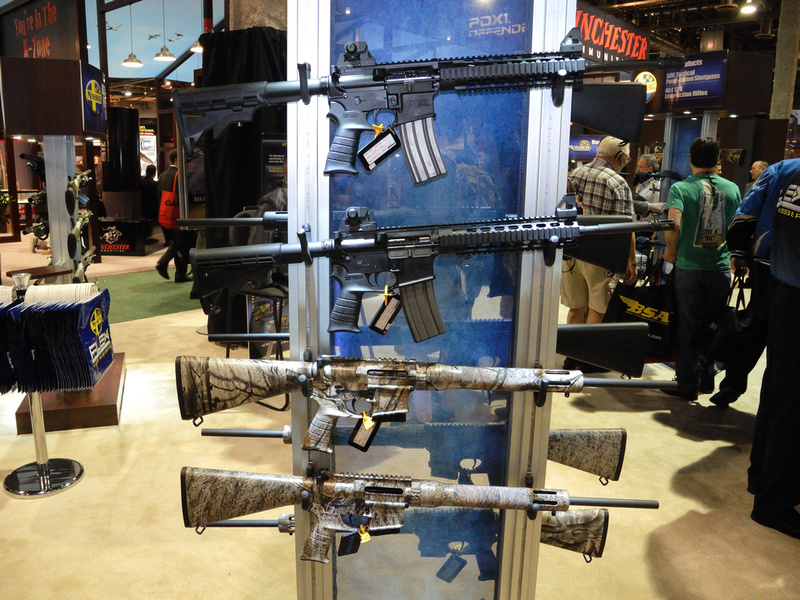 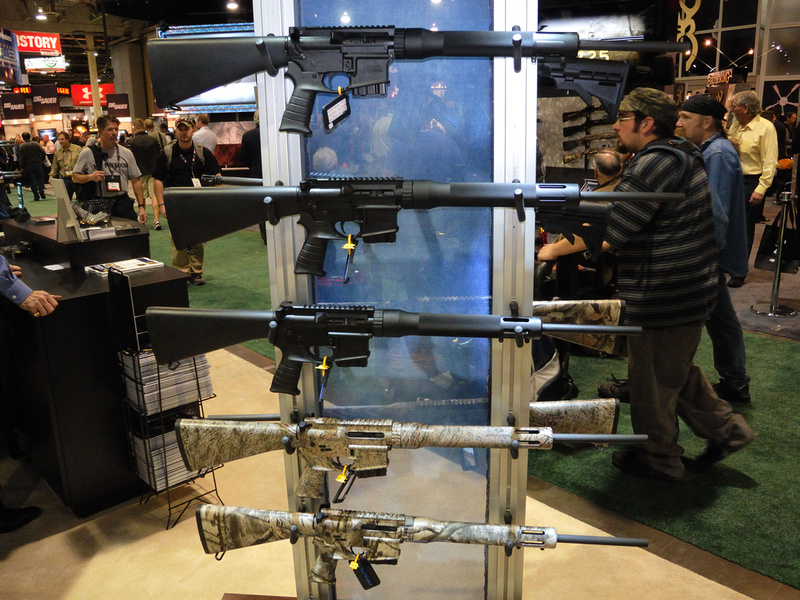 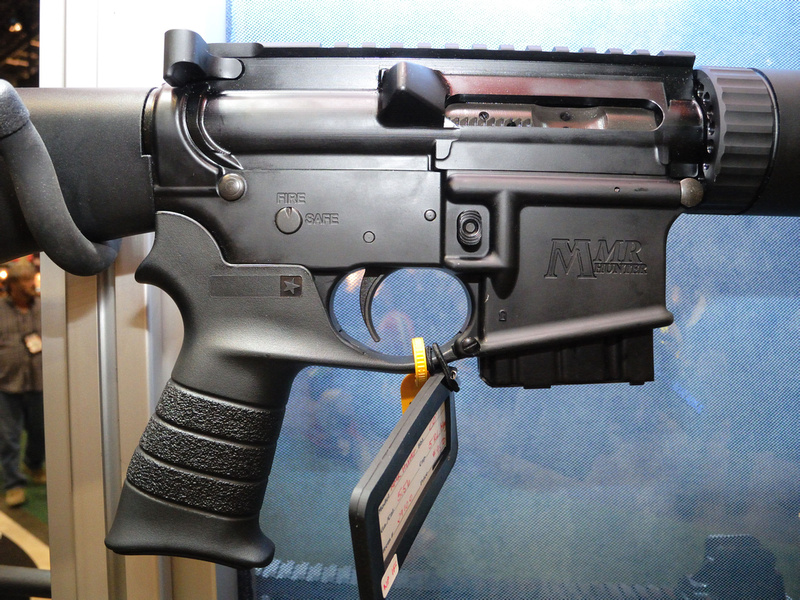 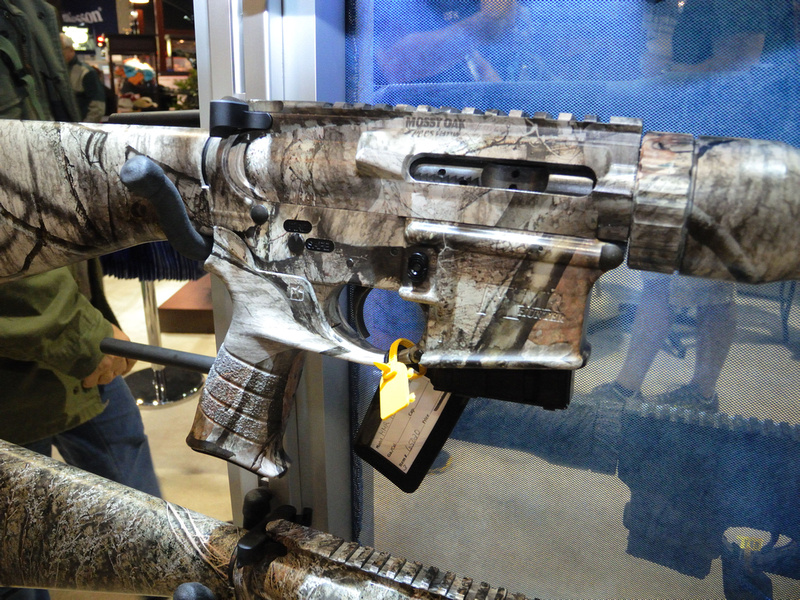 I just noticed this has over 6,500 views... I think the've got some attention over this gun.

I have been reading the "AR 15 and variants thread". Also this "MMR" thread and wondering which way I should go. Since its almost a foregone conclusion that I will own an AR15 type rifle, the question is which route to take to get it done.

1) I have followed Rossignol's decision process and outcome on the Olympic and I like the price point and relative ease of not having to build from scratch.
2) I could go the "build your own route". Not having any experience on this and the additional time it would take to complete the build does not seem like something I want to deal with.
OR
3) I could go the "MMR" route. Although not a true AR, it would satisfy my purpuse for owning in the first place.

At this point the only criteria I have is that I want to own and AR type rifle for target shooting and I would like to become very good at it so that I can be very accurate beyond 200 yards.