Supporter
"Philanthropist"
We can use this thread to post up reloading data .


Here is a good link to Hodgdon’s reloading data table. Good resource! Check it out

Supporter
You should always use the load data from the powder you are using, They should have their own load data on their web sites, Start small and work your way up and never go above suggested grains.

Best of luck all :mrgreen:

Moderator
"Philanthropist"
If you don't have a particular load manual, please contact me. I don't have all of them but I know of some nifty online workarounds for (say) Sierra rifle data which comes from Sierra themselves upon which you can click and study (yes and even print) . Not every cartridge is encompassed but it's fairly broad in its depth.

Supporter
"Philanthropist"
sweet, I got about 500 223 brass and am interested in different loads for standard FMJ. I will be loading these in about a month or so.

Moderator
"Philanthropist"
It's never easy. I don't think you can absolutely depend upon the powder manufacturers website for true data if what "brand" of bullet they used was a diifferent "brand" bullet than yours even if the weight stays the same.

Bullets, particularly rifle, have different ogives and friction areas which can have different effects on pressure. Or even worse, one rifle bullet being used in someone's load data manual is proven safe but by switching bullet brands you now have a bullet whose ogive is now touching the lands whereas the other brand was not. Some rifle bullets of a particular weight are flat based and some are boat tail. Simply swapping bullets of similar weights might lead to the round being jammed tightly into the chamber leade.

I always like a challenge, if it were easy everyone would do it and it wouldn’t be as satisfying.

Moderator
"Philanthropist"
If you want some samples of .224" bullets to try before jumping into the deep end, give me a shout. I'll see what I can muster up. Have you reloaded any rifle ammo prior, or is .223 Rem your first foray?

Moderator
"Philanthropist"
Have you arrived at a beginning load and bullet choice?

oli700 said:
sweet, I got about 500 223 brass and am interested in different loads for standard FMJ. I will be loading these in about a month or so.
Click to expand...

Just wait till you have to trim after sizing most of your brass. Sucks, it does. But the effort pays back to you. Have you begun loading your prepped brass yet?

It ain't that difficult, it's just more time consuming than doing pistol ammo. So I'm apologizing if I made it sound like loading .223 Remington was a PITA. But the great part of Rifle loading is having a bunch of sized, trimmed, champhered, and primed rifle brass and some time on your hands. Then you can add the powder and seat the bullet (and LFCD if you want to) in about ten seconds per round!!!!!!!!!!!!

Supporter
"Philanthropist"
man, I dont know how all your posts have slipped by me.....sorry. I have loaded it before . Just wondering what data you had luck with, powder, charge, .....fire season is over here so I will have time to get it done now. My best friend has all the brass loading stuff and I have all the SG loading stuff. He only lives a block from me but he works fire too and our days off dont line up till about this time of year so we are about to have a reloading fest.

In all honesty I have tried a lot of loads. And since my ARs have either irons of EoTechs (and not a scope) I cannot really say that any particular load is vastly superior over the others. In my world, if I'm getting 1"~3" @ 100 yards my world is good. I've loaded (in no particular order) Varget, AA2230, H335, BL-(C)2, H322, and maybe a couple more. Bullets have ranged from 52-gr SMK and 52-gr A-Max, to 55-gr Combined Technology Ballistic Silvertip and plain old 55-gr BTFMJ, to 68-gr Hornady BTHP Match and 64-gr Winchester PowerPoint SPs.

As long as I trimmed to 1.755" and seated to the cannelure and threw somewhere around 25-26 grains of powder in them it was all good.

Now if I had a scoped rifle and shot out to 300 yards or so then I would have probably tried to develop a pet load for one of my rifles.

Probably my best load (which was shot with with A2 irons from a 20" stainless match barrel) has been a CCI #41, Combined Technology 55-gr Ballistic Silvertips and 26.0-gr Varget with OAL at 2.250". I once shot a 3-round 0.648" group with that load, which I would have been proud to shoot with a decent scope! I was having a good day on that one. 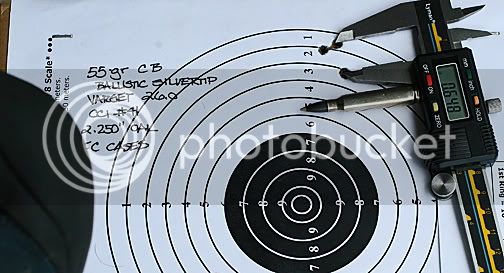 Supporter
"Philanthropist"
Awesome, am shooting iron sights too but with an old mini 14 . I have been shooting this mini since I was 15 so I can hit well with it but I dont expect alot as far as grouping . I am looking for a good shooting plinking load. Thanks for the information ! 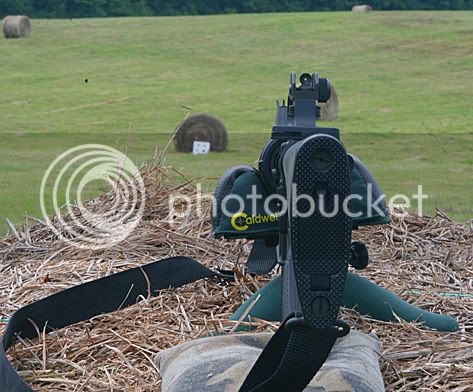 Uhhhh, wait. Yeah, that actually was a 100-yard target. That's why I was so proud to show it off!!!!!!!! I know the telephoto lens compresses things and it doesn't look like 100-yards but we used a 150-ft tape measure to set that target hay bale precisely at 100-yards from where I was shooting.

At the gun show i bought a box of 338 original Barnes X bullets. Since i am so new at reloading i didn't use my head and realize how obsolete this ammo had become. I heard there were big problems with harsh copper fouling for starters with this X bullet. Long story short. I wrote Barnes and had them email me the load data for this bullet as i couldn't find it anywhere. The bullet seems a little longer than the average bullet and i noticed that the min and max powder charge is lower and always within 5 grains between the min and the max.
S

OK guys I try here too, I have perused the posts for the bulk shotgun ammo and found it interesting. And I posed a question about loading .58 cal mini bullets and .58 cal round ball in to a 20 ga. I read something a reallllllly long time ago but I don't remember all the information. So if anyone has done this ,knows this, or even thought about it. let me know. Yeah like some of the other guys in here I'm chea,,,,errrrr frugal
S

OK guys I'll try here too, I have perused the posts for the bulk shotgun ammo and found it interesting. And I posed a question about loading .58 cal mini bullets and .58 cal round ball in to a 20 ga. I read something a reallllllly long time ago but I don't remember all the information. So if anyone has done this ,knows this, or even thought about it. let me know. Yeah like some of the other guys in here I'm chea,,,,errrrr frugal

This is a Hot Load so expect to see some flattening of the primer and some minor cratering. Your brass probably won't last very long. My Savage has a chamber about a half an inch thick and a very stout bolt.
If you blow up your AR shooting this one don't blame me.

I don't have an exact yardage because I don't have a range finder but I am told this target was at 240 yards. The conditions were mild Gusty winds swirling 90 degrees right to left as they went down the range. My first shot was on the paper 3 o'clock.
Then I put 5 on the target. Under calm conditions I think I could shoot this half MOA at 200+

This is a Hot Load & not sure I would try to shoot it in your particular gun. In any event I single shot every one because they won't feed from the magazine that way.