"Philanthropist"
Yesterday I was reflecting back on the first gun I ever purchased some 60 years ago. Certainly not the first gun I shot or was given as a kid but the first one I actually purchased with my own hard earned money. Back then hourly wages were mostly around 60 to 75 cents. If you had a "high paying" job it was a dollar an hour!

My first purchase was a Ruger Blackhawk "Flattop" revolver in .357 and given my very limited resources I shot probably 10 times as many .38s as higher priced .357s. I remember paying around 9 to 10 cents a round for .38 and in many country stores you could buy all types of rounds in single quantities. For "four bits" you get one load out! Those were the days!

I'm interested - What was your first purchased gun? Any related stories?

Staff member
Administrator
Global Moderator
Wow. I'm sure this is going to be a fun topic. Though, in my case, may be somewhat embarassing.

I'll be completely honest, I don't exactly remember what the first gun I bought was. I traded for many guns before I ever actually paid cash money for one. Thompson "tommy gun". Chinese Tokarev TT-30. Few others off the top of my head. That's why I'm having such a hard time thinking which one may have been the first one I bought.

I think the first gun that I actually paid for was a chromed Jennings 380 jammo-matic piece of crap that I paid $79 for. I hated it so bad when I finally got it home and tried to shoot it that I went back to the pawn shop the same day to try to get my money back. Naturally since I told them that I had shot it, they only offered half of what I paid for it a few hours before. Needless to say, I would never do any more business with that pawn shop. And they didn't stay open long either before shuttering their doors (gee-I wonder why).

Later, I traded it for beer and whiskey. Which was a trade up. I assure you. That gun wouldn't fire 4 rounds in a row without jamming.

The first gun I bought was when I was about 10 or 11. This may not count because it totally INOP.
There was an old double action 6-shooter that did not have a hammer I paid about $2 for at a flea market in Virginia.

My first useable firearm was a 1911A1 I bought at a pawnshop in Lawton OK when I was based at Ft. Sill.
The price was $45.
The guy talked me into buying a Colt .22 conversion kit for another $25. [That kit is worth several hundred bux now... more than the .45!] 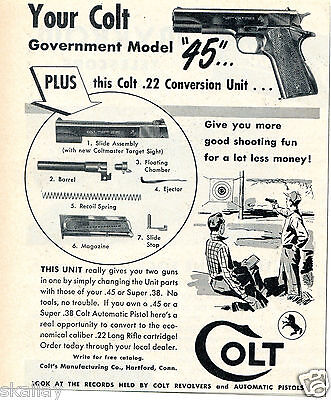 I was given a few weapons as a child, but the first thing I ever “purchased” was a used Marlin .22 semi automatic. Had a fairly nice wood stock, but it wasn’t walnut.

I don’t remember the model number. Maybe model 61? It didn’t have much bluing left on it but it was well oiled.

A guy traded it to me for some air tools I found in the back of a used Chevrolet.

It shot very straight but it had a tendency to jam a lot. I sold it for $50 to Gilman Mayfield’s shop in Fresno almost 30 years ago.

I probably only owned it for five years.

I think the first firearm I ever bought (I'd bought several air guns as a kid) was an Anshutz 1813 .22 rifle back in the mid 80's... I was in a target club when I first applied for my Firearm Certificate, and bought that as my first target rifle.
That was the first step down the rabbit hole... since then i bought multiple pistols, only to have them confiscated by the Gov, so then switched to rifles again and currently building up the collection
I'm at the stage now where I've agreed with SWMBO that if I want a new one, I have to sell one...

"Philanthropist"
1972 or so my first actual purchase was model 19 S&W. It's another one of those if I had it to do over stories we all have.

I don’t know why, except for the talisman value.

I only have the little Bodyguard .380 auto.
C