Sweet. Can't wait for the pics.

Global Moderator
Sponsor
Moderator
Picked up the hog hunter today! The guy is only about 50 miles up the highway.

While emailing back and forth with him, he asked if I needed a scope and mentioned he had a couple things and if I wanted to look at them he'd bring them along. I told him I was interested but it would have to wait a bit and that was ok because I like to teach my daughters to use the irons first.

I get there this evening and were talking for a few minutes and he said here, take this; and handed me a box with a scope in it. I was stunned and appreciative and thanked him heartily! I didn't look at it, he said it had been mounted to another rifle and he had shot only targets with it but he had never had it in the field. I told him I wasn't worried about that I simply appriciated the gift. I looked at down the road a little ways, it's a TruGlo 4-16x50 with illuminated red/green mil style or BDC reticle. It's really nice and the Burris rings and bases are in there too!

I have no idea what the scope cost, but the package was a heck of a deal, the kind I hear about but never ever come across!!!

Hunting in the am but maybe pics after that!

Global Moderator
Sponsor
Moderator
A pic, but its still undergoing some work. This isn't its final form.

Looks pretty good to me.

Global Moderator
Sponsor
Moderator
Thanks! The pic is a little rough. I have a good pic but its way too big for the forum. For whatever reason when I scaled it down it gave me only two options of large (still too big) and medium (way smaller) so it looks grainy.

That's the big brother to my wife's 22

LOL hey I realized that in Kentucky that would make us related.

It's the only state where it's legal for a gun to have a cousin.

Global Moderator
Sponsor
Moderator
This is in no way a product review nor a long range report. Just where I am so far.

Here are some of my initial impressions this far and maybe some comparisons and contrasts given the reviews I've read over the last few years of the model 11 Hog Hunter.

The stock has been the biggest complaint. I believe if you're used to a sturdier stock, a laminate or solid wood stock or something with pillar or 3D bedding, this one will likely seem flimsy. It's not as bad as I expected. I could easily rest it on a back pack, and presumably a bi-pod, without the forend contacting the barrel. I read one review about how the barrel is canted in the barrel channel. Mine is too. The barrel isn't canted though as much as the stock is slightly twisted, as a result of tightening the action bolts I suspect. The stock is affectionately called the Tupperware stock. It's light and ugly. I bet you could beat the crap out of and it wouldn't hurt a thing. I'd also bet the recoil pad is a Hogue. Checkering is nice and deep, it could take the skin off your knuckles. And I like it.

Iron sights are a plus. My front sight isn't centered, it's set a little right, meaning I had to adjust the rear a little right of center. It works but its annoying. I'd like to replace the front ideally though and if I do, I'll center better. It's a dovetail mount on a ramp with a brass bead. The brass bead is difficult for me to pick up, a fiber optic would be way better. The rear is an LPA adjustable for windage and elevation. It doesn't fold like a 10/22 but it would be cool if it did.

The trigger guard is plastic. Steel replacements are readily available for around $25. I'm not worried about it, but some are I guess. The accutrigger is nice. Once the blade is pressed into the trigger face, there is no creep with a nice break. I believe the varmint guns are set to 3.5 pounds.

The barrel is a "medium" contour. Some say the best of both worlds, others say its the worst of both worlds. Some say it makes the gun heavy but not heavy enough to gain the benefits of a true heavy walled barrel. Whatever. I'm not shooting competition and thousands of rounds. For me the gun opens up another opportunity to get out with my kids and hunt some more. Or at least suck at trying, lol! The barrel is threaded for flash hiders or silencer/suppressor or suppressor ready flash hiders. The thread protector is the basic nurled design. Easy off, no tools. Some complaints I've read say the individual needed a pipe wrench to take it off and then the threads were buggered.

The bolt handle is the over sized teardrop shape. Feels excellent, easy to manipulate. The short action is nice and easy to cycle.

I have seen videos and read reviews where the first round failed to feed from the internal top load only/blind magazine. I've heard of rounds nose diving. I've not had any such issues, though I've not fired 1000 rounds through. Just that out of the box it cycled the way one expects. I was not disappointed. Specs say the magazine holds 4 rounds. It holds 5. Maybe it's 4 for the .308, the .338 says it holds 3.

Everything has a matte finish. No idea how durable it is. It's not phosphate.

I sighted in the irons today but only to 25 yards. The target is a blur at 50. As I mentioned above, my sights are off center. I'm not really even sure how I would center the front blade. A dovetail pusher tool thingy? Probably not a huge deal, they're there as a back up to an eventual scope.

So here's my red neck engineered table and rest. It's really all I've got. Except the table. That was borrowed. Took a few shots but I put three on the bull and called it a day.

Global Moderator
Sponsor
Moderator
I am amending or correcting one o the things I mentioned in the previous post.

The sights are made by Williams. Somewhere someone had told me they were LPA.

The more I think about it, the more it bothers me that the front sight isn't centered in the dovetail mount. It throws off the alignment with the rear and its annoying. I know it's not a big deal, I just don't like it. And what's more, much of what I read about removing the front sight, people are breaking the ramp off the gun. I was thinking a set of Williams fire sights would be a great idea, and reasonably inexpensive at about $30 or less. But I'm not sure I want to try removing the front blade. Most people removing the front sight are using something like a dowel rod to support the ramp. I'm thinking there has to be a better way.

Global Moderator
Sponsor
Moderator
Got a better pic yesterday. It's been raining almost non stop so no real range time yet.

I made it out for some shooting today!!!

I'll preface this by saying I've never shot anything like this before, never through a scope and never at 100 yards, but I'm happy and excited!

I got on paper at 50 yards with PMC 55 gr FMJ and corrected. I moved out to 100 yards after that and attempted to zero with the PMC but groups were wide enough I honestly didn't know which way to correct.

I changed it up to American Eagle black box 55 gr FMJ. The photo below will show how it went. The first group was a little right but cutting the line on elevation. I corrected to the left and shot the second group around the bull.

That first group was the better of the two, I apologize my calipers are partially covering the second group which measures 1.4" MOA.

The Hornady produced a decent group as well but the zero is different. I'm not going to change it yet. @Water Monkey is helping me figure out some dope cards before I start messing with anything. I'll do some more shooting first too.

So I'm shooting a little more than MOA and right now I'd say that's all me. One more gratuitous photo just before the 50 yard sight in.

Moderator
Supporter
I have some dope cards on my ammo I shoot on my .223/5.56 rifle that I'm gonna modify for @Rossignol AE ammo.

I'll also include some wind adj info on it too.

That's a lot better than I did my first time out with a scoped rifle...

That's a lot better than I did my first time out with a scoped rifle...
Click to expand...

But I have the benefit of having been able to live vicariously through all of you the last several years. I've been paying attention.

Global Moderator
Sponsor
Moderator
Did some more shooting at my neighbors place today. I shot my first sub-MOA group. Promptly followed by a group that is more like 1.5 MOA.

The sub MOA was first an unopened pop can followed by two shots nearly touching, they're about a half inch apart. 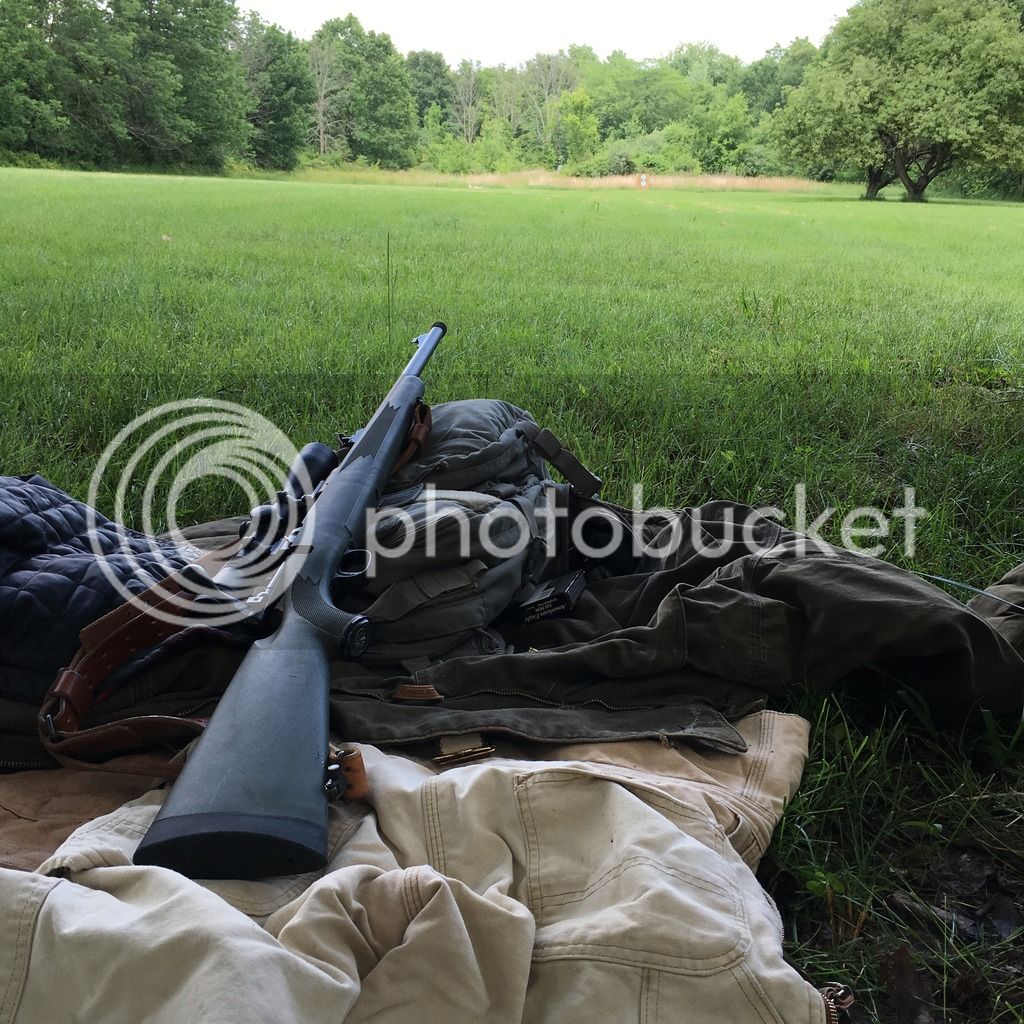 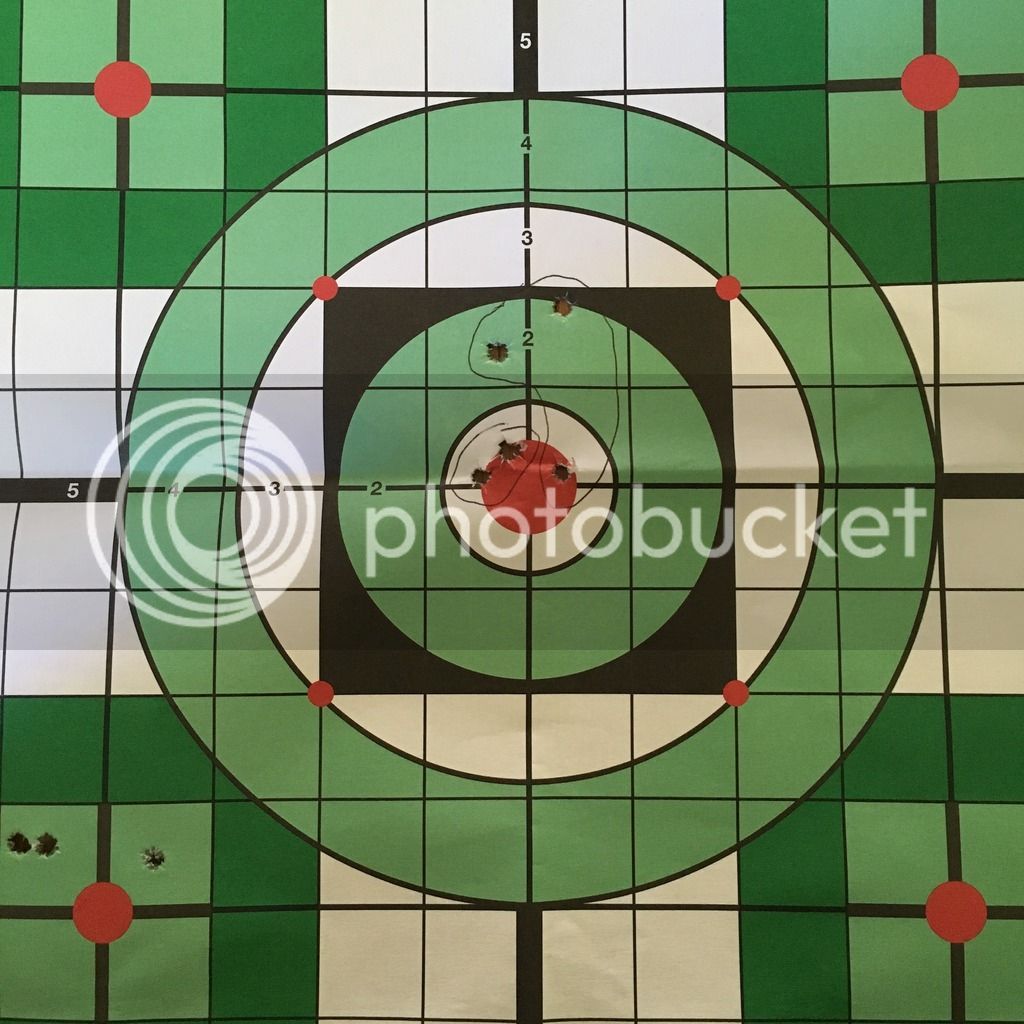