I got out to the rifle range with my best shooting buddy Bobby and we had a really good time throwing lead at paper. The weather was perfect and it wasn't very windy, but there was a modest crowd of people at the members range.

I think I finally figured out how to work the ghost ring sight on the Henry .22 magnum. It's quite a challenge when you're shooting tiny targets at 50 yards, but learning how to focus on that sight is a trick.

I previously called this a Lyman sight but it is a Skinner, and I have not tried to adjust it yet.

All of these targets were shot at 50 yards with the Henry .22 magnum, and the Skinner ghost ring style peep sight.

This would have been a nice pattern of 5 if I hadn't flinched, and it is about the best shooting I did. 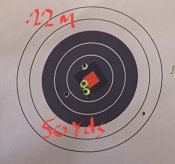 I had paused between targets and so I took a second Cold Shot at this target before shooting the one above. The grouping on this first Target was much worse.

Also shot at 50 yards, this was my best 3 shot group with the 38 Special Henry.

That gun has a 9 power Tasco scope on it. The other shots are part of a .22 pistol rapid fire mess. I would have covered them but I ran out of pasters.

This was my last Target of the day and so I didn't get to fill it out. I got a nice group of five from the 22 magnum and a group of three from the 38 Special. This was also shot at 50 yards. Both cases I was shooting at the center diamond, and the .38 could obviously benefit from a scope adjustment 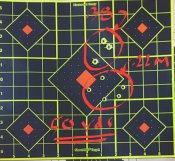 The 38 was balky, and it has always been so. I finally determined that it wasn't getting enough lubrication in the ejector Groove. That made a big difference in the operation of the rifle.

I took the lever and bolt out and took a good time to clean it up and re lube it.

The other guns all ran flawlessly and I didn't keep any Targets. Mostly I was function testing and tuning.

I also took my Ranger 16 gauge shotgun, because I had shortened the firing pin a little bit on the left Barrel.

Last time I'd had a few misfires on that one.

This time I ran 23 shells through the gun and had not a single miss.

I practiced shooting both guns from the shoulder and the hip, but we didn't throw any clay.