Since shockwaves are so hard to find

Ernst said:
Picture is MAC-V SOG (Studies and Observation Group), which was comprised of special operations operatives which in the day (later 60s - mid 70s) were running top secret and covert operations in Cambodia and Laos. Members, including personnel from all services, were authorized to use any weapons and the weapons of choice included AK-47s and modified M79 grenade launchers. As shown in the picture the M79 stocks were chopped (Shockwave style) and the barrrel mounted sight removed. Information on this operation was closely guarded until the 1990s and the Pentagon Papers.

If any of you would like to read an overview of this unit take a look at this link.

John, sorry to hijack your thread!

Then it threw me for a double loop hehe. Typically I imagine SOG guys wearing ODs or tigerstripe, I'd completely forgotten that they got their hands on ERDLs. I guess what I thought was a Ka-Bar must be a pilot's survival knife.

While not mentioned on that site Operation Eldest Son is a favorite of mine. Really sneaky and still having repercussions today amongst terrorist organizations hehe

On that note the Shockwave really does seem like something they would have used back in the day.

"Philanthropist"
Given the interest one more infomation share. SOG personnel were provided picture identification cards, a copy which I will not share, however here's a lift of the inscription.

I found it a very interesting read.

Staff member
Administrator
Global Moderator
I was able to finish the gun this morning after the forend was delivered. It's longer than a "regular" shockwave, but it's well over NFA limits and "easily concealable" guidelines so I don't have to worry about my dog or wife and baby being shot.

Only thing that is lacking is the side saddle that will store the extra shells. But that will be a few more days. In the meantime, she's pretty much ready to go. 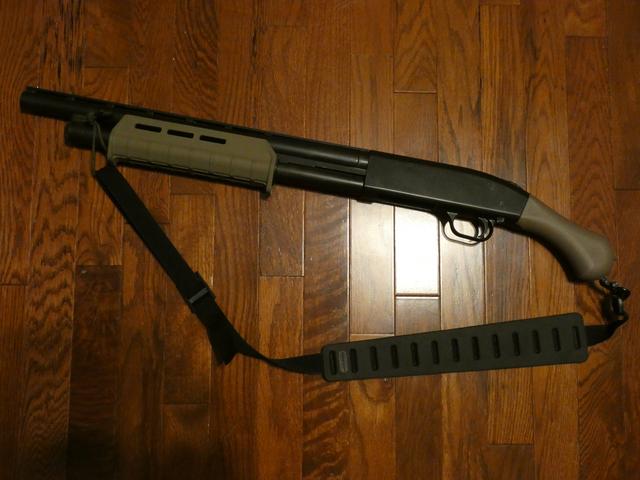 "Philanthropist"
Most excellent John. Turned out well and you certainly don't need a foreend strap.

Now to try out a selection of ammo. Good luck!

I have a couple different handload recipe buckshot shells to try out. Plus my slug load.

The buckshot loads have two different wads. The hornady versatite wad generally has shot better for me with the buckshot than the others I have tried.

Staff member
Administrator
Global Moderator
Thank you guys. It should be fine for a truck/brush gun.

"Philanthropist"
John, if I remember correctly, you, like me, deal with bears. Just a thought for your consideration. We typically have black bears coming within 20 to 30 yards when working outside thus our greatest immediate threat is an unprovoked charge. People generally don't realize how quick these "docile" creatures can run in a full charge. You are lucky to get a couple of 12 gauge rounds off.

Which brings me to some thoughts on round loadout. I carry my Shockwave when working outside with a 00 buckshot round chambered and a Brenneke 1 3/8 oz slug first in the tube. My thought is a buckshot round as a deterrent and if needed, a slug to finish the job. The rest of the magazine is loaded with buckshot. I do carry a mix of slugs and 00 buck on a shot card if needed.

These Brenneke Black Magic 3 inch magnum slugs are the best I've found and are used by guides in Alaska for grizzly protection. Little more kick than a 00 buck round but manageable (even for this old guy) out of a Shockwave.

Disclaimer: no association with Brenneke other than a customer/user.

Staff member
Administrator
Global Moderator
You are very correct. And I also appreciate your advice.

My state Department of fish and wildlife in, KENTUCKY, in their infinite wisdom (that's sarcasm-I really mean stupidity) has protected black bears to the point where they do not fear humans. And on top of that, they associate people with free and easy food.

This creates not only a hostile environment certainly for humans of course, but also one for the bears. This is caused directly by mismanagement on the states' part, so I'm just going to call a spade a spade.

And considering that I live in the bear capital of the state unfortunately, that means we have to deal with a lot of bears.

The state may come out and trap one and move it every now and then. And they even routinely hand out rubber pellet shot shells to folks, those are only temporary solutions to a very real and big problem.

It was to the point where we used to live, we couldn't even let our young children outside to play in our own yard in fear of them being attacked and I had to stand armed guard while they played in the yard. I have even been chased around the old house while simply trying to take out my trash on garbage day. It hung its' head down, shook it and worked his self up and even snapped his teeth a bunch of times before charging.

My wife used to call me on the cell phone before she cut off the main road so I could be outside in the driveway when she pulled in the yard.

They have fought with a dog that I used to have. And the dog didn't go after the bear. I kept him on a chain in the back yard.

I have photos of no less than 20 different bears at our trail camera over the last 10 years or so. Some of which have 2 to 5 cubs at a time. And as you are aware, momma bears get excessively protective when their young are near too.

I have even seen fish and game park at my mothers house and wait for the bear to come out and shoot it with those rubber pellets, only to 5 minutes later see a different bear come out of the woods into the other side of the neighborhood.

Yeah, it's really that bad.

Most people around here subscribe to the 3 "S" technique anymore. I certainly don't condone anyone breaking any laws, but I am not going to be a willing participant to being munched on by a 400+ lb bear either.

Anyone that says bears will run off when you are nearby and are more scared of you than you are of them, are flat out stupid.

"Philanthropist"
John, Amen brother. Lots of folks could learn from reading about your experiences with bears. These magnificent creatures are not pets and people do a disservice to everyone, including the bears, by feeding them. They can turn on you in a heartbeat, especially a sow with cubs.

It's not so much that people feed the bears. KY even has a law that can fine you for "unintentionally feeding the bears" if they get into your trash.

So, no one willingly feeds them.

But we have a lot of dumpster diving bears. Even to the point the sow's will take their cubs around and actually TEACH their young to do it.

Again, not a good environment for them or us. Being very rural (I live in the woods), our trash doesn't run every day like it does in some cities and places. Our trash runs once a week. So, you have to fight constantly with the bears.

They want you to keep the trash put up.

And for many, that means in their house.

Folks aren't going to keep their trash inside their house all the time stinking up their place. Nor should anyone. That's a health risk in itself. But, then fish and game gets upset when they have a lot of calls about bears.

So, it's a constant struggle.


Though most people don't shovel. They'll just gut shoot them so they'll run up into the woods and die somewhere else, maybe days or even a week or so later after the stomach juices set up infection and septic shock in their bodies.

Very cruel way to do something for sure, but it happens. A lot. Considering they'll seriously charge you for murdering one of their bears. That's why I said they've been so protected that they don't have a natural fear of humans.

I'll just leave this here for a few examples if you have a few minutes to spare. While most of these are not in my state, it's happened here too.

And a bunch of other similar stories.

"Philanthropist"
Thanks John. I'll make time to check it out.

"Philanthropist"
Do not feed birds in Pennsylvania.

Do not carry a gun in the woods in Alabama. Carry pots and pans in case you encounter a bear.

And don't forget your cellphone in case you're attacked and mauled and chewed up and some important parts are no longer inside of you like they're supposed to be.

That way, you can give specific directions to 911 as you're bleeding out which oak tree you hiked past 30 minutes ago before turning left at the big rock with moss on one side of it.

Maybe the rescue squad will find you in time, but the odds of that are very slim.

Too many oak trees and big rocks for them to know which specific one to come to. Our county is almost all wooded.

It's not like you have a street address to give to 911 and an actual road through the woods for the rescuers and ambulance to come get you.

And of course, so fish and game will know where you're at so they can give you a ticket for "unintentionally feeding the bears".

"Philanthropist"
Wearing or carrying some bear bells works well too. Helps the fish and wildlife folks identify which bear ate you. But typically takes the bear two to three days to process the bells!

Think a lot of folks have replaced the shovel with a backhoe but principle is the same.

I hear it works on non four legged ones too.