Ammoshoponline has these on closeout. has any one used these here? any feedback on them? thanks

Call me Mr Pig, as in Guinea Pig... I ordered 5 boxes each of slugs and buck, 15rds per box. Order came to about $130 with S/H. Equates to about $0.80/rd. I'll update once I receive them. If they intercourse me I'm holding you personally responsible! (jk)

I have a NIB Opsol2 I've yet to try out with the 500 so hopefully they work out.

PS: you might want to hop on this before they sell out...

Staff member
Administrator
Global Moderator
In looking at the BBB reports, there are 99 complaints filed against ammoshoponline in the last 12 months.

now selway has buckshot... a much more reliable site.

John A. said:
In looking at the BBB reports, there are 99 complaints filed against ammoshoponline in the last 12 months.

Yeah, I read some of the comments. Mainly shipping issues. My order has a FedEx Ground label created but hasn't been picked up yet.

I used to swear by FedEx Ground but had a major issue shipping with them earlier this month. f****g assholes can't even read an address label! My very large package went to a central distribution center and sat around for a few days, then went BACK to my local center, then BACK again to the central center and off to final destination. Delayed it about a week and NONE of the broken-english speaking customer reps were helpful at all... (rant over)

You're going to have to be the guinea pig for that one...
S

I just ordered 75 rounds. I want to compare them to those I've made with #4 buckshot. Thanks for the heads-up.

John A. said:
In looking at the BBB reports, there are 99 complaints filed against ammoshoponline in the last 12 months.

FexEx shows it in transit so we shall see.

Received my order yesterday. Took about a week. Pics tell the story--From Russia With Love... I haven't had time to fire any of them yet... Of this writing, they are still available AND the price is lower! AFTER I ordered... I may order some more including birdshot but I'm waiting for someone here to tell us if they work or not...

Mine should arrive this week. If I get a chance, I'll test em out.

Glad they came through.

I probably won't get a chance to test them out this weekend. But when I decided to pick up a few extra buckshot, they were sold out. However, I noticed that the slugs were on sale for $6/box (15 per box) I couldn't pass up the chance to pick up a few. They're 1oz slugs instead of the 7/8oz slugs that Aguila sells. I'm interested to see the difference.

I don't know about your neck of the woods, but here in CFL, there is plenty of snap, crackle and pop going on from fireworks. Technically they are "illegal" but the good gubna Ronny D signed a law last year saying Dec. 31st, Jan. 1st and July 4th they are "OK"... The yahoos (myself included) have "stretched" the holiday out for the entire weekend with noisemaking beginning Friday night. Like gun fire, it is the sound of Freedom!

Anyhow, tonight was a perfect time to function test the two styles of Techrims I ordered, single ought buck and slug. Installed the Opsol and it appeared to function well helping to guide the shells in and out during a dry run. As it was a Saturday, no one was around the shop nor traveling the street so I loaded, then fired one round of each in the 500 with 18.5" barrel. Directed both shots towards the ground at about a 45^ angle. The picture is the result--a hole about 8" in diameter and 6" deep. My son took a video but doesn't really show much other than sparks out the barrel and some noise. Yes, they sounded "loud" to me with earmuffs on... The 500 has Tamers on it (fore-end and PGO) but no "kick" was noted. Satisfied they worked, I then alternately loaded the tube with 4 of each--the regular mag tube of the 500 will hold 8. At a little over 400fps (info from the box) it would be interesting to see how they perform on ballistic gelatin.

A couple days ago I re-ordered 5 boxes each of slugs, 0-buck and added birdshot (#8?) this time. Price on the slugs and bird were $6 as Raz noted and the 0-buck was $9 and change. Total was about $130 after shipping which is average $0.58/rd. I still haven't received a confirmation for this order but I will attribute that to the holiday weekend.

In related 4th news, I went to the local fireworks "tent" and perused the selection. Prices HAVE gone up! At least 50% since last year and yes, we celebrated the 4th in FL last year--Fark Fauxrona! I walked out empty-handed figuring it would be cheaper to buy ammo plus I already have a bunch of leftover fireworks from the New Year. 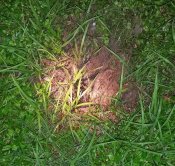 with all these ammo sales now Putin can buy that new mallet he was looking at...

Bobster said:
At a little over 400fps (info from the box) it would be interesting to see how they perform on ballistic gelatin.
Click to expand...

This sounded really slooooow. So I checked the box and it read 420mps. I assumed that's meters per second, so I pulled up my metric conversion chart and that translates to about 1378 feet/second. Not too bad.

Thanks for the mini review. I haven't gotten to put any of these through my Shockwave, but if they perform well, they'll be a great value for the money...almost a steal.

Razzle said:
I assumed that's meters per second, so I pulled up my metric conversion chart and that translates to about 1378 feet/second.
Click to expand...

Received my second order of techrims today. Three boxes of slugs popped open from shipping and shells were loose and floppy inside the box. There were a few wads of paper I removed to take the pic. I would have liked to see them packed better or shrink-wrapped together but no shells were missing or damaged and I just put them back into their boxes. Took less than a week to get to me. Fortunately, FedEx arrived while the wife was away--what she doesn't know won't hurt me nor can she bitch about it.