I've been putting together my 500. I wanted to put a Streamlight TL-Racker on it (as I have one on my Shockwave) but balked at paying the price again. So I was looking around the big auction site and found a Treeline Forend Light. From my research (not a lot to be found online) it produces 900 lumens - which isn't much below the 1000 produced by the TL-Racker. However, the price was about half of the Streamlight and used the same CR2123A batteries. Since I'm not mad at my money, I took a chance on the Treeline.

The Treeline light came with a forend nut removal tool, which was handy. Installation was a breeze, and the operation was very similar to the Racker. In fact, the reason the Treeline light was taken off the market (It was originally sold at Tractor Supply.) was because of a patent infringement lawsuit from Streamlight. Also, like the Streamlight, the Treeline unit was wobbly when installed...which didn't matter to me. I tried to break it off, but couldn't. There was a little different feel to the Treeline, but it wasn't a bad thing. I think this was because I'd shot the Racker on my Shockwave for so long that the feel was a bit strange. I got used to it almost immediately.

As for the light itself: I took both the Shockwave with the Streamlight and the 500 with the Treeline out and tested them. I really couldn't tell much difference between the two. Both beams were incredibly bright and gave a no-doubt-about-it target illumination at 75 yards. For me, this is enough. I haven't ran any rounds through it at night, but will this week, and I will update this thread. If you're interested in adding a forend light to your 500, I definitely recommend the Treeline. Since they're no longer sold at retail outlets such as Tractor Supply, you will have to search the big auction site. There are still a few available, and at least one is listed at the same price as I paid as of today (11/21).

For full disclosure: I am not affiliated with Treeline, Tractor Supply, or any of the sellers online...just a happy customer. I also do not know if it will fit the Shockwave. 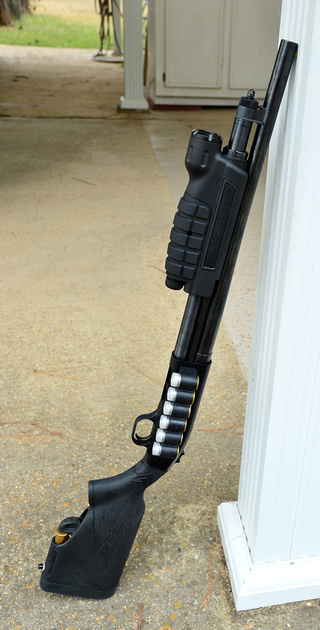 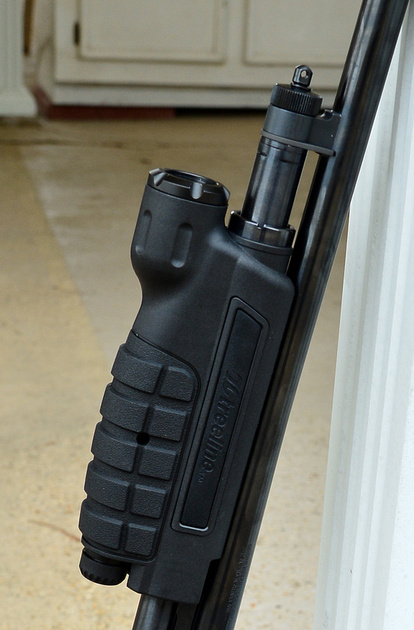 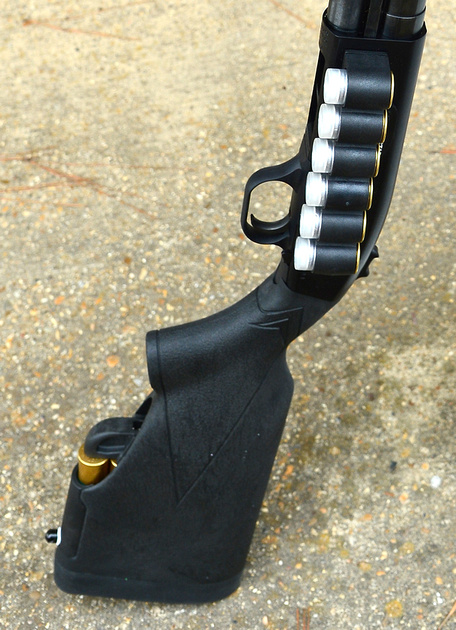 Staff member
Administrator
Global Moderator
Thanks for the post razzle. A few of us were recently discussing weapon lights the other day.

I can also see why tractor supply was sued for patent infringement too. They do both look very similar.

I would also like to say a big THANK YOU for testing and using them at night. Far too many folks get something and never think much else about it. So, I'm really glad you're trying it out to make sure there are no surprises with loose wiring or bad battery contacts or any other myriad of thigns that could be wrong that you would never notice unless you start putting live rounds through it.

I put 60 rounds of my homebrew minishells through it with the light on with no issues whatsoever. I noticed that the Treeline had a bit of a tighter beam throw, while the Racker had a little more spill. But the difference was not very pronounced. Either would work well in an inside-the-home or outside-the-home (within 60-75 yards) application. I do think the ergonomics on both could be improved with an on/off switch that wasn't quite so susceptible to accidental activation...but I guess we can't have it all.

Knowing what I know now, and had one been available to fit the Shockwave, I would've gone with the Treeline light. There just isn't enough difference in performance to justify the difference in cost.

Looks like a hand grenade! Tell us about the buttstock...

Moderator
"Philanthropist"
Does the Treeline forend light have fully potted circuitry and electronics? Pretty sure Streamlight does,, which means it can take a lot of abuse.

It's called a Tactaload Flash-5. It's ridiculously expensive, but it was what I wanted (since the shotgun itself was an early Christmas present from my wife). It adds a little weight to the buttstock, but that's a good thing - at least for me - as it dampens recoil. With my homebrew minishells, I can put 9 in the mag tube, 1 in the chamber, 6 in the side saddle, and 5 full-sized rounds in the Tactaload...for a total of 21 available rounds.

nitesite said:
Does the Treeline forend light have fully potted circuitry and electronics? Pretty sure Streamlight does,, which means it can take a lot of abuse.
Click to expand...

I don't know if the circuitry is fully potted. I'm assuming it is. As much as I love the Streamlight, I know that if the Treeline version can be sold this cheaply, the Streamlight can be too.