Why Carry a Gun?

My old Grandpa said to me, 'Son, there comes a time in every man's life when he stops bustin' knuckles and starts bustin' caps and usually it's when he becomes too old to take a whoopin'.'

I don't carry a gun because I'm angry; I carry a gun so that I don't have to spend the rest of my life hating myself for failing to be prepared.

I don't carry a gun to make me feel like a man; I carry a gun because men know how to take care of themselves and the ones they love.

Police protection is an oxymoron: Free citizens must protect themselves because police do not protect you from crime; they just investigate the crime after it happens and then call someone in to clean up the mess.

PLEASE DON'T THINK FOR A MOMENT, THAT THIS COULDN'T HAPPEN IN OUR COUNTRY ALSO !!!!!!

You won't see this data on the US evening news, or hear politicians disseminating this information.

*Guns in the hands of honest citizens save lives and property and, yes, gun-control laws adversely affect ONLY the law-abiding citizens.

With guns, we are 'citizens'; without them, we are 'subjects'.

During WW II, the Japanese decided not to invade America because they knew most Americans were ARMED!

Gun owners in the USA are the largest armed forces in the World!
If you value your freedom, please spread this anti-gun control message to all of your friends.

The purpose of fighting is to win. There is no possible victory in defense.

· SWITZERLAND ISSUES A GUN TO EVERY HOUSEHOLD! SWITZERLAND'S GOVERNMENT ISSUES AND TRAINS EVERY ADULT IN THE USE OF A RIFLE.

· SWITZERLAND HAS THE LOWEST GUN RELATED CRIME RATE OF ANY CIVILIZED COUNTRY IN THE WORLD!!!

· IT'S A NO BRAINER! DON'T LET OUR GOVERNMENT WASTE MILLIONS OF OUR TAX DOLLARS IN AN EFFORT TO MAKE ALL LAW-ABIDING CITIZENS AN EASY TARGET.

· I'm a firm believer in the 2nd Amendment! If you are too, please forward this. If you're not a believer, please reconsider the true facts. This is history; and if we do not want history to repeat itself, we must wake up.

https://www.caracaschronicles.com/2014/02/20/the-game-changed/
Throughout last night, panicked people told their stories of state-sponsored paramilitaries on motorcycles roaming middle class neighborhoods, shooting at people and storming into apartment buildings, shooting at anyone who seemed like he might be protesting.

And in other news:

I live in the part of California which has the largest Armenian Refugee population and their descendants.

It is also the part of California which has the broadest gun ownership.

Djcala said:
Not me,I copied from 1asstorisk site:
Personally, I carry a gun because I'm too young to die and too old to take a whoopin'!
Click to expand... 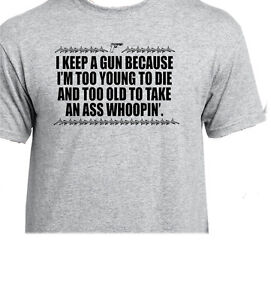