What's going on with the Canadian Convoy?

I'm a little behind on current events, can someone explain what's going on with Trudeau?

S.R. Crawford said:
I'm a little behind on current events, can someone explain what's going on with Trudeau?
Click to expand...

Trudope is, was and will always be an (insert derogatory description here) . He mandated truckers get vaccinated or something like that and they are not happy about it. So they "protested" by driving en masse to the Capital of Canuckistan. Trudy has been hiding in his basement ala Bidet.

Now be nice Bob. He said he’s suffering from the Covid and he is social distancing for health reasons.

It’s not healthy to have tire tracks on your back.

"Philanthropist"
Yesterday, at the Coutts / Sweetgrass border crossing a number of local farmers joined the protest by driving their tractors and equipment around a police road blockade. These are the big tractors that farm thousand of acres and many were pulling equipment. Apparently the locals in Coutts have opened their town to the truckers and some are providing food, fuel and shelter. There are some news feeds that are telling the truth about these protests and showing the happenings.

This is a feed from yesterday afternoon which shows the real situation in Coutts vice what the MSM and governemnt is putting out.

Staff member
Administrator
Global Moderator
This material is so good that I thought it should be brought up to the front and a dedicated topic for it.

Just for the record I shall repost this photo which captures the free Canadian spirit of it all.

Staff member
Administrator
Global Moderator
I bet biden would call it an insurrection.

Staff member
Administrator
Global Moderator
It's really funny when the rule of law gets turned on its head and those that think they're the ruling class are reminded that they're not in control as much as they thought. 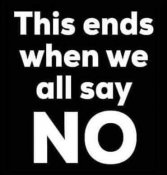 So when do we join?

Also saw this on another forum. Obviously, I cannot confirm, but was interesting nonetheless.
--------------

Also saw this on another forum. Obviously, I cannot confirm, but was interesting nonetheless.
--------------

So the hoser has actually taken off eh? 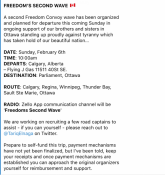 "Philanthropist"
Breaking - Canadian farmers and truckers have shut down the border in Sarnia which is between Michigan and Toronto.

Staff member
Administrator
Global Moderator
This is how shit gets done.

Staff member
Moderator
Supporter
"Philanthropist"
There's a lot of pissed off people up here and has been for a long time. This pre-dates Trudeau by decades but he's made it so much worse. I think people have just had enough. Enough tongue lashings and constant disain from that pissant have just put people over the edge.

In Canada, our system gives too much power to politicians and bureaucrats without enough checks and balances.

The RCMP being one of the worst examples of bureacracy run amok. A toxic mess, they are well past their "best before" date...the funk from the rot within is about unbearable.

We have seen more rule by individuals and small committees in the last 2 years than in generations past. It is also well past the time for those undemocratic, emergency powers to be laid down and given back to the electorate.

I should add that the media bear a large part of responsibility for things going this far. They have constantly villified conservative views as racism, bigotry and misogyny and have stifled open and free debate by taking sides rather than remaining neutral as they should. They have consistently for decades, taken away the voices of a very large and PRODUCTIVE part of the citizenry who are usually too damn busy to bother protesting anything.
Last edited: Feb 4, 2022