Who the F is in Charge?

I saw photos of Taliban in captured US vehicles and aircraft today.

It appears we left these things intact!

I can’t imagine why we didn’t blow the stuff up?

It’s like our generals decided the Taliban wasn’t the enemy anymore.

Premier Member
They can’t give the stuff to police forces anymore so why not leave them to the bad guys. Can you imagine the trouble you’d be in driving a Hummer with a 50 cal mounted on the roof to your local grocery store?
I guess it’s only good in Afghanistan not NYC.

Staff member
Administrator
Global Moderator
"Philanthropist"
We left them in the hands of the Afghans who rather than fighting for their rights immediately surrenderred everything to the Taliban.

This is such a freaking disaster.

Edit:. Can hardly blame them we pulled all support, contractors etc. Biden knew it was going to happen yet did it anyway. Anyone who helped the US will likely be killed, terrorism will increase.

Or purpose for being there was to hold a footprint to dissuade major terrorism after 9-11. In that task we were successfull. The evil that will fill that vacuum will be a nightmare.
Last edited: Aug 17, 2021

MikeD said:
We left them in the hands of the Afghans who rather than fighting for their rights immediately surrenderred everything to the Taliban...
Click to expand...

The Afghan soldiers would not fight to defend a crooked government which had victimized them for years.

There was no real and personal “investment” by their military. We gave the Afghanis their weapons. They did not build them, fight for them or earn them. There was no pride driving there actions, and only fear and resignation.

Same thing happened in Iraq when ISIS mosied on in... Cowardly Iraqi soldiers gave away the farm and their women. Nobama could have prevented the fiasco by bombing the columns of ISIS vehicles entering from Syria before they even had a chance to cause much damage. Instead there was bedlam then a "surge" which wasted more American lives and dollars...

Fornicate "nation building" I say. When the US conquers a country we should at the very least maintain a base there. Forever... If the savages can't keep it together, not our problem. The picture John posted is a clear example of why we shouldn't give away arms and equipment to conquered countries... They didn't have to "earn" it, therefore don't have a stake in retaining it.

Bobster said:
... Cowardly Iraqi soldiers gave away the farm and their women...
Click to expand...

There is no real pride in being a Muslim. It’s a religion of mob rule, that subjugates the believer to the bighat who runs the local mosque, and thus they are conditioned only to a life of subjugation.

As a Baptist, I kind of take pride in the fact that no one is encouraging me to murder.

"Philanthropist"
It appears no one is in charge, no one knows anything, no one is responsible, and no one gives a damn.

Articles of impeachment have been filed. 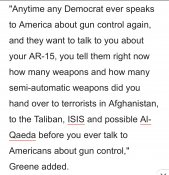