Trying to take care of an old gun

Staff member
Administrator
Global Moderator
Many years ago, my Dad gave me my first gun. An old 16 gauge break down single shot Stevens. He and my uncle went to a guy they knew that bought and traded a lot of guns, and it was an unexpected surprise to me. I didn't know anything about it. My uncle recently told me that he was pretty sure that Dad gave him $65 for it. And in typical fashion for my Dad, talked him down from $75

That old gun and I have walked many miles through the woods. Some of the most memorable times of my life have been spent while carrying it.

I don't mean to come across as too sentimental over an inanimate object. But, the gun does mean a lot to me. But, it only represents why it means so much to me. For starters, Dad trusted me enough to have it. That came with a lot of responsibility that only came with age and maturity. And in many ways, was a right of passage.

While growing up, I hunted almost every day when some season was in. Didn't matter what it was. And that gun never failed me. I'm not going to say that I never missed with it, or anything, but the gun has always done what it was supposed to do and has been like an extension of my own arm.

I looked through an old photo album recently and saw a picture of it in my old bedroom when I was growing up. It was probably taken just before I moved out on my own. But, the old gun is in the gun rack underneath of an old smoke pole that my Dad built from a kit. Complete with some junky camo tape because I thought it would help me get more squirrels. It didn't. But, that's a story for another day. 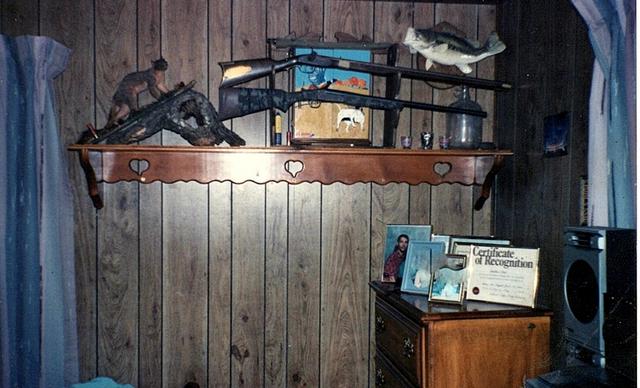 Over the years, I have had other guns come and go. Some I've used a lot. Carried a lot. But this year, I have pulled that old friend out of the safe and have used it every hunt that I've been on again. I have to admit, it's like riding a bike. It points and shoots the same as it always did. And so far, every time I've pulled the trigger, I've gotten what I aimed at first shot. You just can't argue with that.

The first time that I took it back out, I noticed the hulls aren't ejecting. They're extracting, but I'm going to have to change the spring. The hulls are only extracting about half way out of the chamber and that's it. When it's right, would launch empty shells 6 or 8 feet behind you.

So, I'm going to order a new spring for it. Thankfully, finding new old stock springs is still possible, despite being more than 45 years old now and out of production for almost 30 of those years.

I was also noticing the blueing on the reciever. Or, the lack thereof. There is still some blue on it, but that's honest to goodness wear. 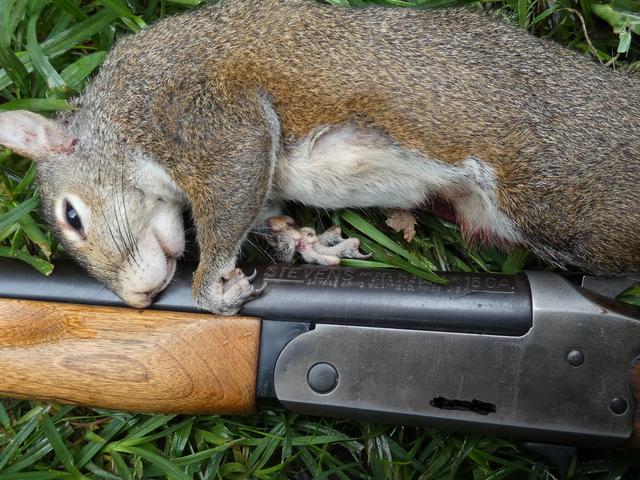 So, while I'm waiting on the new ejector spring, I decided while I had it apart that I was going to try to reblue the receiver. While it's not the really dark deep black that it used to be when I first got it, at least this way, the metal is protected again for hopefully a few more years. 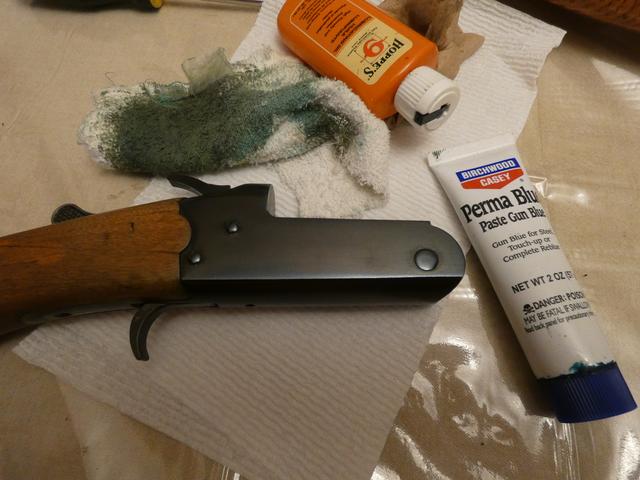 "Philanthropist"
John, thanks for sharing your memories and photos of your trusty 16 gauge. Good times beget good memories.

Still making good memories with it. So far I've gotten to go on two squirrel hunts with two of my 3 sons just this month alone. Hoping the oldest will get to go soon too. I'm blessed for that.

I ordered the replacement spring from numrich this week. I got a tracking update on it, which said it arrived in Chicopee, Ma and I had to laugh. Chicopee falls is where they made these guns up until the early 60's, so that spring is passing through its' old territory too. I'm gonna call that a good sign.

STEVENS ARMS CO.
Location: Chicopee Falls, Massachusetts
In 1864, this firm began doing business as J. Stevens & Company. In 1888, it was incorporated as J. Stevens Arms & Tool Company. It operated as such until 1920, when it was taken over by Savage Arms Company. It has operated as an independent division in this organization since.
Click to expand...

Just what are the odds of that?

Moderator
"Philanthropist"
A very heartwarming story, and wonderfully written. You are a wordsmith.

Staff member
Administrator
Global Moderator
Thanks for the compliment buddy, but I ain't no Jerry Clower. I got to meet him once about 5 years before he passed away. Truly genuine and good guy. He would be the first to admit that he didn't tell funny stories. He told stories funny. He was truly a word smith.

Is there a way to get that Perma-blue to set really tight to the metal? Or do you just keep putting it on and rubbing it out?

John, I’m looking at that photograph of guns on the bedroom wall and thinking that I don’t have more than two or three photographs from my life that were taken before the 90’s.

In today’s world, that’s like none of that ever existed at all.

Staff member
Administrator
Global Moderator
Actually, I had found another pic of my room when I was a young teenager, but that was the first one I found where I had taken a picture of the gun, instead of all the squirrel tails I kept hanging over my bed as trophies of what it would do. 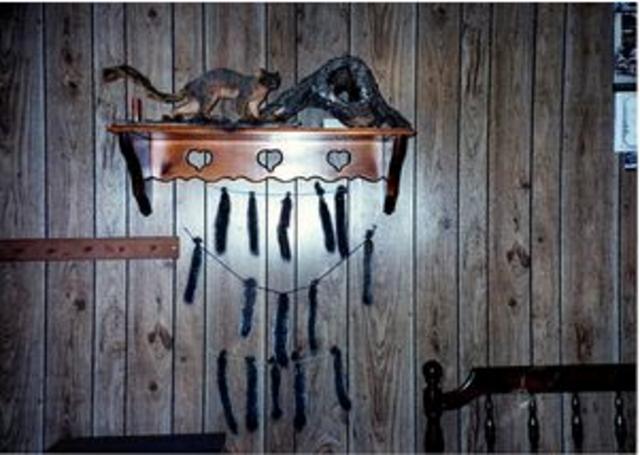 As for the cold blue, it will rub off eventually though it is a chemical treatment. And it's not as good or penetrate as the old style of bone bluing that many companies originally did.

But, gun blue is a form of rust. And if you treat the metal with it, somewhat helps prevent worse rust from attacking the metal.

Make no mistake though, it will wear off eventually. But it wont' rub off like a magic marker or something. After a while, it will look like the first picture that I posted in this topic. But, any blue will do that. Especially on older guns that have been used.

I did find a picture of me holding my first turkey that I ever got. But the gun wasn't in it. I did get that turkey with it though.

I’ve used that just to do some touchup on guns, though I put quite a bit of it on that old 16 gauge shotgun of mine.

I was going to blue a spring that I made for my bicycle out of flat spring wire. If I don’t do something to it is going to rust so I figured I will put Perma blue on it about 10 times.

This is a small part, so if it would help to set it by heating or boiling or baking or something, I could easily do that.

While hot bluing is pretty simple and straight forward by heating part up and dipping in oil (I've not tried it with anything besides traditional motor oil which is increasingly harder to find these days), I always worry about affecting the temper and the hardness of metal by heating it up too hot, so that's why I cold blue mostly.

I checked the tracking info, and looks like my spring wont' be here until Monday with any luck. Bummer. I was hoping that I would be able to change it out this morning.

Staff member
Administrator
Global Moderator
I was able to finish the project today. The new replacement spring came for the ejector. But took some effort to get it working.

For starters, the new spring was more tightly wound and had a smaller inside diameter. I would imagine that since they didn't note it, it was probably for a 12 gauge. It was the same length as the old one and considering that a 16 isn't that much smaller diameter or less weight, may last a while longer than the original did? Even if not, the two shells are close enough to the same I don't think it'll make a difference. But that means the guide rod that came in my gun wouldn't fit it. So, I asked myself, what would Grandpa do?

Here's a quick pick of the old and new spring. And you can see the old guide rod a little in the picture near the top. 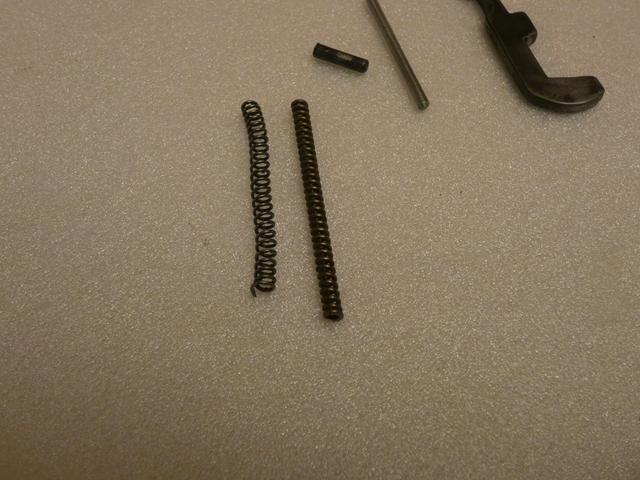 Since the old guide rod would not work, I stop to think about what may fit? I looked at the parts and whatever I used would have to be tiny. And sadly, there are so many different variants of that model, I couldn't find one that looked exactly like how mine is set up anyway.

But, back to the matter at hand. I go out to the shop and look in my scraps and everything was far too big. Paneling nail, too big to fit. So, I go over to the airgun nailer and pull out an 18 gauge finishing nail. Lo and behold, it slid right into the spring like it was made for it. So, measure and cut it to the same length as the old guide rod and put it into the gun. Worked like a brand new one. I put an empty hull in it and opened the action and it launched it about 6 steps behind me. That's how it's supposed to work.

Over the weekend while I was waiting on the mailman to bring the part, I felt like the wood was needing some attention too. So, I took it off the gun and gave them a good scrub in steaming hot Murphy's oil soap. Not only does it clean well, it helps to rehydrate the wood. It's common knowledge that wood that's too dry and for too long, is more prone to crack in the grain. So, the best way to combat that is to occasionally give it a good hot bath. Let it soak up some liquids.

Now that I've went over everything, maybe it's ready to hunt for another 45 years. 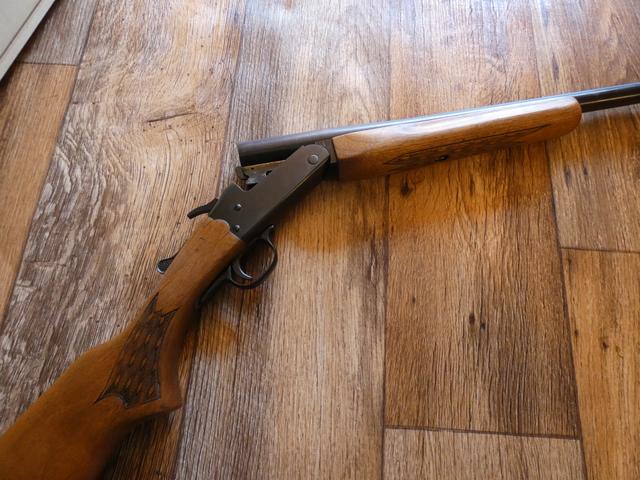 Staff member
Administrator
Global Moderator
Well, the finishing nail only worked a handful of times before it bent and it stopped ejecting again.

So, we'll shoot it a while and see how it does. But for now, strong ejection again. It's working as it's supposed to. As you can see in the schematic below, part #23 is the ejector spring. There is no guide rod shown. But I guess this isn't the only thing mass produced that had a rolling production part change at some point in time. 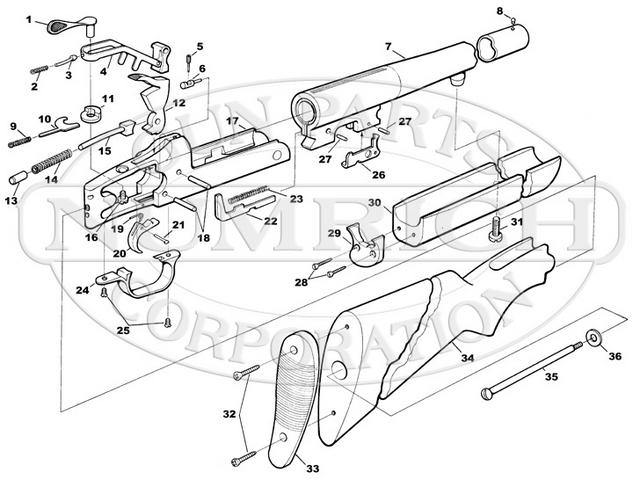 Staff member
Administrator
Global Moderator
After a week, plus a hunting trip, the gun is still ejecting. So, that's good.

I was worried that I may need to order a 3/64" hardened steel drill blank, but this is working.

Actually, the allen key may be a little more rigid and stronger due to the shape having more surface area with the hex shape?