Yet, another off the wall project

A while back, there was a lower that I had gotten and it took a while to source the parts to finish it. Well, finish it probably is not the correct terminology, but enough parts to get it in usable condition.

I had been wanting a 357 lever action for a while to use as a brush gun. But, they were either overpriced, or perpetually out of stock.

So, I made the best of the situation and started looking into the 10mm stuff and being able to spread the money out over a longer time. This way I could essentially make a modern day equivalent of what my grandpa and great grandpa used in the deer woods. While I would still love a 357 lever action, this was about the best that I could do under the situation and as near the ballistics as what they were getting out of their old marlins.

I'm not really sure how fast 158 gr 357 can be pushed out of a 16-20 inch barrel if loading to the max, but I'm getting 1770 fps out of my 16 inch 10mm barrel. Which I don't believe is anything to hang my head about and should be enough to take a whitetail or most anything else I could come across where I live.

But after getting it built, the ejection was terrible. It was spitting out empty cases probably 15 and 16 feet or more away. Which was just way too much in my opinion.

So, in thinking about a solution, I tried different springs, used heavy buffers and stuff, and while improving with each possible solution, I eventually decided to do a rifle length stock.

But, the problem is, no one makes heavy buffers and stuff for pistol caliber carbine stuff in rifle length configuration because it would seem that most people want to make them as short and compact as possible. I understand and get that for the most part. I've been guilty of that myself with some of my other projects I've done. But, since I'm already using the longest barrel available for it, I didn't think that adding a little extra length of pull onto the back of the gun would hurt anything. And in fact, maybe help balance the gun out better in the process. And besides, I like rifle length stocks and the improved length of pull. To me, they just seem right.

I had used Ace skeleton stocks during the ban years a lot and also like A2 stocks so I knew that I liked that length of pull and cheekweld and stuff. So, in an attempt to save a little money, I rigged up my own rifle length piece of kit since no one makes anything like that.

With all the insanity about pistol braces, I ended up with an extra gearhead works pistol brace that wasn't in use anymore and decided to mount it onto the back of a rifle length tube and slid a piece of foam over the tube after trimming off the excess nub on the back of the tube where a rifle stock would normally attach. While not a perfect solution, it was still very similar to one of Ace/DoubleStar lightweight minimalist stock and after shooting it and using it and testing it, I can say that it has truly grown on me and I couldn't imagine shooting it any other way now.

As many of you know though, carbine length buffers don't jive in rifle length buffer tubes. They're far too short and would cause battering of the bolt jamming into the rear of the receiver.

So, that had to be addressed as well. I simply measured a rifle length buffer and machined some aluminum to add to the length (and weight so it would further slow the bolt down). After doing this, I realized where the 10mm case is so much shorter than 556, I could've even added another 1.5 inch to the shaft to even further shorten the travel but copying the standard buffer length has still worked well and seems to function great. 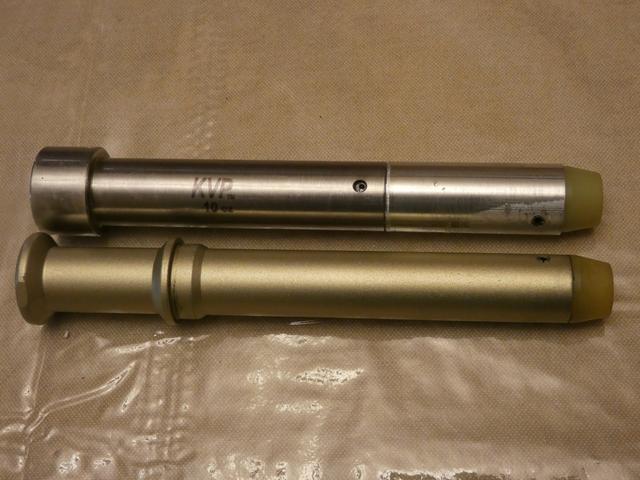 Since the shoulder for the buffer spring was still in the wrong place, I simply made a sleeve that slid over the shaft to make up the extra difference.

And for good measure, I made the shoulder location a little shorter to add even more extra tension on the spring as well. 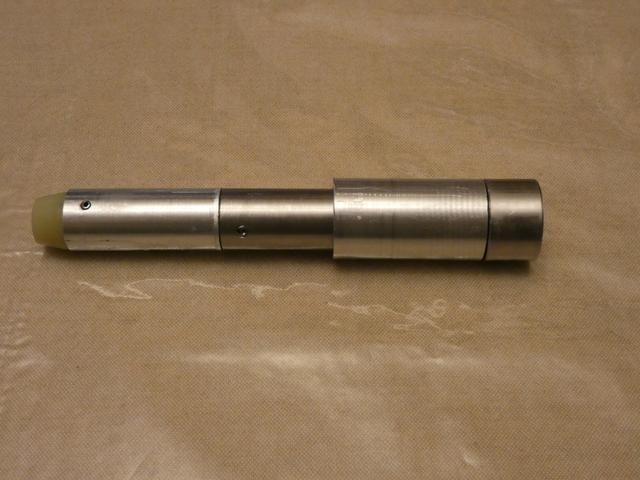 While not a lot of material, the total weight went from 10.1 oz to 12-1/4 oz. And combined with the 308 caliber flat coil buffer spring, settled the ejection down from probably 16 feet down to closer to 9 feet. While still a lot, I do still have other guns that are worse and the truth is, I'm loading these rounds to max pressures too, so any factory bullet shot through it will certainly be a lot more anemic too. I want to be able to shoot factory loads through it too, though I don't really see why that I would because I'm wanting as much as I can squeeze out of it.

But, after shooting it some, the gun seems to stay flatter during firing, the recoil impulse being spread out over a longer area seems to be softer shooting, and most importantly, my brass isn't being launched into the next zip code.

So, this is one of those necessity being the mother of invention tales, if no one makes what you want, and you're determined enough, you can generally work around that and do it yourself.

I don't necessarily "hate" the looks of the rifle length buffer tube. While it is some longer than the collapsible tube that I had on it, I like the way it feels. I may someday buy an Ace brand butt plate that clamps onto the tube. But for now, this is working for my needs. It's a nice shooting pack/brush gun.

Here is a "rifle stand" I made a while back just messing around... They can also be used to hold a bar inside a doorway to do pull-ups.

I thought about one of these:
https://otsupplier.com/AR-15-Aluminum-Skeleton-Pistol-Length-Kit

But, I already had the tailhook brace, so I'm using it at the moment. As I said though, it has grown on me and may stay there from now on.

"Philanthropist"
John, have you ever looked at using an adjustable gas block or gas key to control the recoil and cartridge ejection?