I've been hunting coyotes for 50+ years throughout the mid-west & mid-south. It is my favorite hunting sport for more reason than I can list here. If a person can become really good at hunting coyotes, all other game seems a lot easier. Coyotes are extremely smart, tricky and they learn from experience. You might fool a 'dog' once but you'll never fool the same 'dog' again with the same tactic. I wish we could really get a column going just about coyote hunting. Now that they make a 4x4's in 22-250, 243 & 25-06, there's no reason for Mossberger's to not be coyote hunters!

That's what I hear from everyone that I talk to that hunts coyotes. I am just getting into it so maybe I will pick your brains for some pointers one of these days.

I'd really like to do more here, theyre all over the place!

I have to ask...are they any good to eat?

they don't taste good or not enough meat on em?

my neighbor hunts em. i'll ask him what he does with em....


ripjack13 said:
they don't taste good or not enough meat on em?

my neighbor hunts em. i'll ask him what he does with em....
Click to expand...

Not for eatin. Skin em. Theyre predators and nuisance varmints. They get into chickens and rabbits and bird pens. Sometimes take turkey.

They arent endangered in any way, and their numbers sometimes increase dramatically. Here, in the winter when food gets scarce, they come out of the woods and onto the property. In numbers they arent afraid of humans and could even take a small child (like my youngest) or a pet.
M

I've never heard of anyone eating one, but then again....people do eat some strange critters out there

Around Oregon, we hunt them for the pelts, which used to bring in some decent $$'s. But the economy is slowing things way down.

Now we pretty much go out to protect the sheep/cattle and just to keep control on the numbers of 'yotes.

But as already noted, they are pretty 'wiley'

And if you do miss a shot, good luck ever calling that one in again. They can also be pretty nasty if they get cornered, or if they come up from behind you when you are calling them in. It's good to have another set of eyes with you, to watch each other's backs.

Buddy of mine in central Oregon has a house up on a hill overlooking lots of acreage for his sheep and cattle. We set up on his upstairs balcony sometimes. You can see a LOOOOOONG way from up there, and have all the conveniences of home, too.

Longest shot I've made to date on one...1400 yds +/- a few, with a .338 Lapua mag. I had brought it out to sight it in, and spotted a 'yote out past the target. So I dialed in the scope and got him in one shot. After that I put the rifle away, and 'strutted' my stuff the rest of the afternoon.

Next day, my buddy made a shot at almost 2000 yds using a Barret in .50 cal. :shock: Needless to say, that was one pelt that will never sell.

never intentionally hunted any but shot a few private property nascence tag coyote….too much like a dog for me to eat, actually had some cougar and it was not good in the slightest , probably the thought of a stomach full of cat….damn peer pressure anyway . When I was a kid local ranchers would give kids 75 bucks a skin. I grew up in a logging town of 400 and that’s accepted practice then…times sure have changed

Yep, busted a few over the years. I have not ate one, nor plan on it. Most of the time I don't even mess with picking up the carcass anymore. Yote pelts don't bring what they used to and since they stink hell to high heaven what is the point.

This here is my new rifle in .243 Win that will be going on a summer shoot in a bit as soon as I get this boot off my right foot. 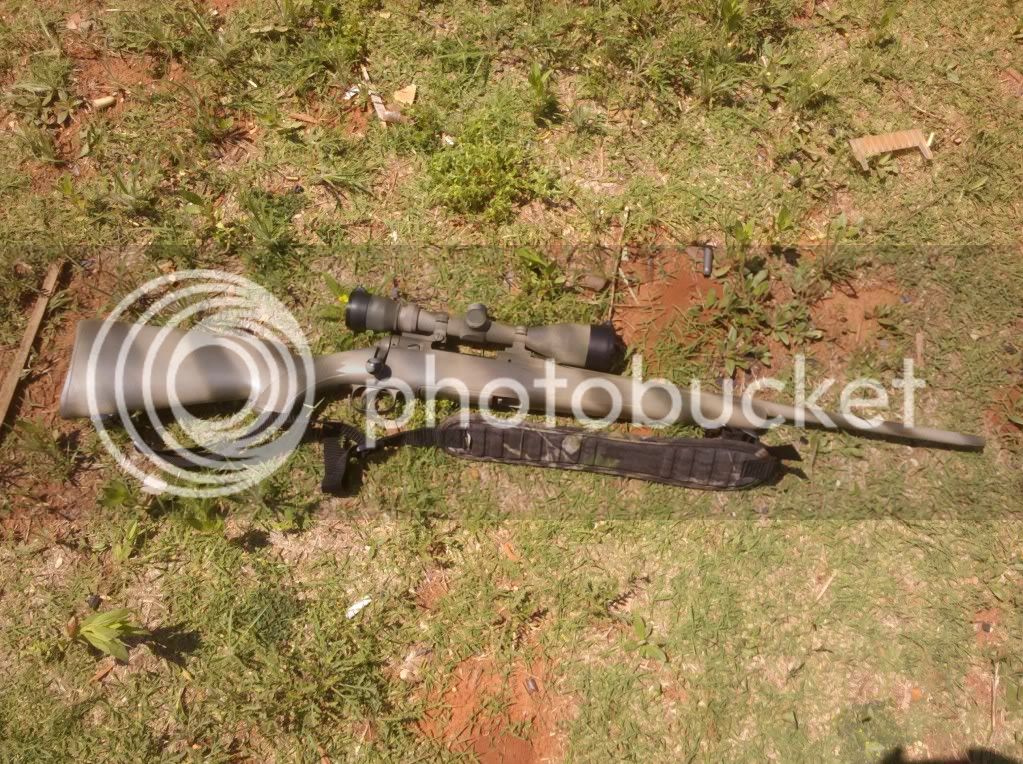 I was out this morning turkey hunting,didn't see or hear any. However about 6:30 I heard some leaves crackling behind me as I was calling on my slate. It as a coyote....it was a adult in great shape. It must have been eating well this summer. I thought it was a beautiful looking animal. The fur was tan and black mix. Big fuzzy tail. But....if he wandered around in front of me I would have pulled the trigger. I was just about to get my shotty into position and I think he smelled me. Cuz I know he didn't see me in my camo, and just booked outa there. Oh well.

I have hunted varmints and enjoy it.

Last night just after dusk, a train went by and my wife and I heard several of them across the creek just behind the tree line howling when the train blew its' horn. I could easily pick out 3-4 different ones. My wife was surprised at how close to the house they were and how many of them there were in such close proximity of each other and I explained to her that they would hunt in packs. So she wants the kids to play closer to the house and I have a free pass for a while to do some callin' : )

They can have litters of a dozen at a time, and it takes a lot to sustain that many predators, so if you get a chance to drop one, please do everyone a favor and do it. They'll destroy turkey and deer and grouse populations as well as plenty of other things.


FULL AUTO said:
I have to ask...are they any good to eat?
Click to expand...

That depends on your idea of 'good'.

Seriously, it's all how you cook it. A co-worker of mine has ate it and says as long as you take only the meatier cuts and treat it like rib meat (boil for few hours then cook your desired method with good seasonings/marinades) it's as good as any other game. Then again this is the guy that loves the taste of buck but hates the taste of does. -shrug- He's also from Thailand where they eat fried tarantulas and all sorts of stuff, so take it for what it's worth.

John A. is that A-TACS on your rifle? If so is it hydro dipped or sprayed? Trying to get a good method for applying A-TACS down with DuraCoat, so just curious.

I think you're asking me about the camo.

It is a hydrodip pattern that I got from Liquidprint. That particular pattern description is Fall Oak HC-452. But I made some changes to the base coat color that altered the physical appearance of how it turned out in the end to match where I hunt better.

I have more about it in another topic about it here: viewtopic.php?f=97&t=1773

Yea, I mean the camo. A-TACS is the new pattern fad that the military is loving on, and I can't blame them, it's dead sexy. It's based off the digital camo pattern, but with more natural colors and rounded edges so you don't stand out at distance through optics.

I really like tha ATACS too! Expensive though, and I dont know how it would look in the woods...

They make 3 different variants of it. An urban with grays, a dessert with tans and a woodland with browns and greens. All the comparison tests vs 3-4 other camo patters it looks good. There is no such thing as a 'perfect camo', but this is the closest I've seen so far IMHO.

A camo pattern is only as good as the environment for which it was matched to go in.

I do think some are better than others, and I've never been a big fan of most of the digital style camo's that have been on the market, but the pictures you have above are an improvement over what they have been using.

Do you want to know how to make the most effective natural camo pattern in the world?

Just look around where you're at and use whatever you see that's common.

Just roll in mud! It blocks body heat from those pesky predators too!