Just wondering if anyone else on this forum collects military rifles from WWI, WWII, the Korean War, or Vietnam War. Whether Allied or Axis...Friend or Foe...or from any other combatant nation. I would like to see pictures and hear the story behind the weapon...

The M1 Garand is officially designated as United States Rifle, Caliber .30, M1 and was the first gas-operated semi-automatic "en-bloc" clip-fed rifle to be generally issued to the infantry of any nation. Called "the greatest battle implement ever devised" by General George S. Patton, the Garand officially replaced the bolt-action M1903 Springfield as the standard service rifle of the United States Armed Forces in 1936 and was subsequently replaced by the selective fire M14 in 1957.

Nice Garand, Shooter!! My favorite rifle which I've yet to own, mainly due to 30.06 prices. I almost bought the Garand when I bought my Cammo M1A but after looking over ammo prices I chose the M1A.

The K98 Mauser, 8mm. This is the way I bought it and have since redone the gun. I wasn't going to but the Russian Captures are quite common.

Love shooting all of these lately. I had my 590A1 out with the Czech Mauser a couple weeks ago and after shooting slugs out of the 590A1 the VZ24 felt like a 22lr!!! The VZ24 is a smooth straight shootin Mauser that feels like a Cadillac when firing it..
S

The ballistics of the 8mm Mauser and the 30-06 Springfield are not that different...both armies were well served by their ammo...but the semi-auto action and 8 round enbloc clip of the M1 made the difference in battle vs the K98's bolt action and 5 round internal magazine.

I'm of to the gun club in about an hour and I'm torn as to what to bring. I was gonna bring my SCAR and the M1A as well as my tactical 10/22 for my wife to shoot but now I wanna bring the K98 and/or the Czech Mausser in place of the M1A..
S

Enjoy the range and post a pic of a target or two when you get the chance...along with the rifle that shot it.

Supporter
I've only got an old 42 Mosin Nagant 91/30, Its a fun shooter.
I almost had a deal with a Naval marksman who wanted to get married and didn't want to spend money on a wedding ring, But instead wanted to trade one of his M1's for it, Sadly it didn't work out

Global Moderator
Supporter
"Philanthropist"
Just the two Mosins for me... 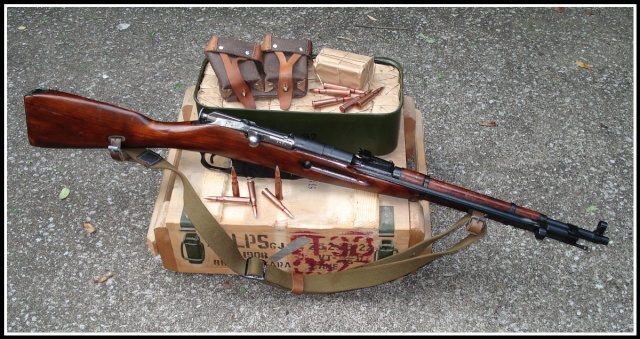 Ya can't go wrong with a Mosin-Nagant...a battlefield staple since 1891 !!

Other variants come from countries like Czechoslovakia, China, Estonia, Hungary, Romania, and even the United States...when the Russian government ordered 1.5 million M1891 infantry rifles from Remington Arms and another 1.8 million from New England Westinghouse before the outbreak of the October Revolution.

When the Bolsheviks took over the Russian government, they defaulted on the Imperial Russian contracts with the American arsenals, with the result that Remington and New England Westinghouse were stuck with hundreds of thousands of Mosin-Nagants. The US government eventually bought up the remaining stockpiles, saving both American companies from bankruptcy. Those rifles in turn were used to arm the US and British expeditionary forces sent to North Russia in 1918 and 1919.

The rifles still in the US ended up being primarily used as training firearms for the US Army. Some were used to equip US National Guard, SATC and ROTC units. Designated "U.S. Rifle, 7.62mm, Model of 1916", these are among the most obscure U.S. service arms.

You guys own some good looking pieces of history !!

I got to the club for some ballistic therapy but didn't shoot the K98 but I did dial my SCAR back in with new PWS brake. This is 100 yards sitting at a bench supporting the gun myself. Top 2" target was quick readjustment and the rest is history..

This a 2" splatter target, the first shot was the best one here..

SCAR is dead on and I'm lovin this gun more and more, so much more I may be dealing some guns to get the SCAR-H...

Thanks LAZY, this one doesn't cease to amaze me. I've got it back to basics and finally have the brake it was suppose to come with. The Trijicon is almost like cheating and any other scope I own doesn't compare and not even close.
S

Anybody else here want to share pics of their Military surplus rifles ?!
C

If I could figure out how to post pictures I would post pics of a 30 cal M1 Carbine manufactured by Rockola and completely restored by Miltech Arms. I bought this several years ago just before Clinton came into office and believe it or not has not been fired since it was restored. This along with a few other weapons are in my brothers gun safe back on the east coast. I am not sure that the state I am in now would like it if I had them with me.

See if this helps...

Global Moderator
Supporter
"Philanthropist"
I REALLY need to get some pics of my Pop's collection.

whats been the favored or best way to find these 'ol relics? My grandfather served in WWII, Korea and Vietnam, I'm sad he passed away when I was too young to chat his ear off about his service weapons.
You must log in or register to reply here.
Share:
Facebook Twitter Reddit Pinterest Tumblr WhatsApp Email Share Link
Top